Berlusconi's Back: Italian Banks and Bonds in Trouble 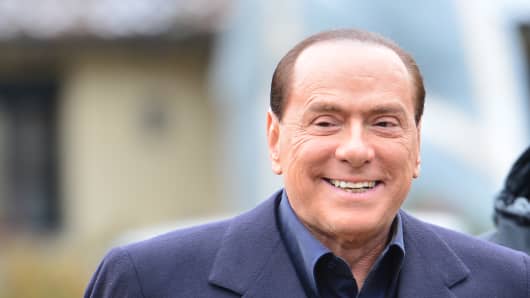 You can't keep Silvio Berlusconi down. A lesser man might be chastened by being turfed out of the Prime Minister's office, an ongoing trial involving a sex scandal, or a conviction for fraud.

Yet Italy's longest-serving leader since the Second World War confirmed what had been long-rumored on Saturday –he is planning a comeback just a year after an ignoble exit from office.

His People of Liberty party has withdrawn its support from the comparatively reserved technocrat who replaced him, Mario Monti.

After being "besieged" by calls to return to the front line of Italian politics (according to a statement from him), Berlusconi declared at the weekend: "The situation today is much worse than it was a year ago when I left the government out of a sense of responsibility and a love for my country."

"I cannot let my country fall into a recessive spiral without end. It's not possible to go on like this."

The consequences in the markets of his return and the potential speeding-up of Monti's departure became evident on Monday morning when Italian stocks fell 2.5 percent and the 10-year Italian government bond yield jumped by a quarter percentage point to 4.75 percent. Trading in several Italian banks was also halted in Milan after they fell around 5 percent.

Prime Minister Monti said that he would resign once the budget law has been passed, which is expected by the end of December. Elections are expected in late February or early March,with Italian media predicting either the weekend of March 3 or 10. Monti could still help to govern Italy after the election, but he has not confirmed any plans.

"The really big question is whether the next election is going to give us a strong majority in parliament, that can reform the way markets and Italians want," Guiseppe Ragusa, economist at Luiss University, told CNBC.

Monti has lived up to hopes that he would be a safe pair of hands, and Italy has avoided some of the negative attention given to Spain in recent months. While both countries often seemed close to the abyss, Spain is now routinely spoken of as the next euro zone country which will need a bailout by international lenders, with Italy usually viewed as stronger.

"The damage to the Italian government's credibility and the rising uncertainty is likely to lead to pressure on Italian assets today, and volatility over the coming months,"analysts at RBC warned.

At the moment,polls suggest that a center-left coalition would win an election. The campaignis expected to be "fierce," analysts at Barclays warned.

"In the eyes of financial markets, Italy needs to complete the reform agenda in order to raise long-term growth prospects," they said.

"In the very near term, all eyes will be on the upcoming auctions."

In coming weeks, Italy is expected to launch a new three-year bond and hold auctions for some medium-long term paper.

While Monti's regime has been viewed with approval, Italy's economic issues are far from being solved,the country has a debt-to-GDP ratio of 120 percent and it's still in the grip of recession.

"The public finances are in order – the real problem is growth," Ragusa said.

"You have to go from the macroeconomic to micro economic perspective. You have to wonder why Italian labor productivity is so low. That will be a medium to long term commitment and many reforms are going to be necessary."