Wall Street's concerns about Washington are escalating, with the December CNBC Fed Survey finding growing investor angst about a recession, the fiscal cliff and the Fed's monetary policy.

The 48 economists, fund managers and strategists who responded to the survey rank the "fiscal cliff" as the top threat facing the U.S. economy and, partly as a result, put the chance of recession in the next year at a 13-month high of nearly 29 percent.

"The fiscal cliff conversation has edged its way to the 'head of the class' when considering the possibility of a new recession," says Kevin Giddis, Raymond James/Morgan Keegan.

Pimco's Tony Crescenzi sees an even bigger problem looming. "The medium to long-term budget problems of the United States are far more important to the ultimate destination of markets than is the 'fiscal cliff.'" 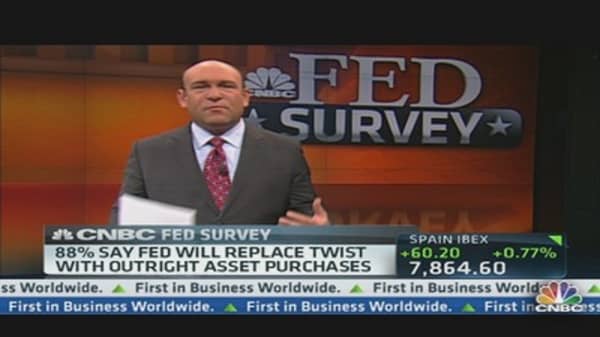 Respondents estimate going over the "cliff" will reduce growth by 1.6 percentage points, a large drag for an economy expected to grow only around 1 percent in the fourth quarter at an annual rate. GDP growth in 2013 is now expected to be just 1.92 percent, down from a September estimate of 2.21 percent and continuing a persistent slide in the outlook for next year from a high of 2.75 percent in March. The effects of the "fiscal cliff" are expected to persist into 2014 when it will shave growth by 0.6 percentage points.

"Allowing the economy to 'go over the cliff' would be extremely reckless. The possibility of unintended consequences is almost limitless." -John Donaldson, Haverford Trust

Haverford Trust's John Donaldson warned, "Allowing the economy to 'go over the cliff' would be extremely reckless. The possibility of unintended consequences is almost limitless."

(Read more: Questions to Ask Your Adviser About the 'Fiscal Cliff')

With downbeat expectations for the "cliff" and the economy, Wall Street sees a flat stock market through year-end and only a 4 percent rise for the benchmark S&P 500 stock index through June of next year.

On the Fed, Wall Street is starting to worry about the central bank's continuing quantitative easing. ( Explain this ) Drew Matus at UBS Investment Research said, "QE is the roach motel of policy: once a central bank checks in, they can never check out."

Fed Survey respondents overwhelmingly look for QE4 to be announced after this week's FOMC meeting ends on Wednesday, with monthly asset purchases shooting up to $85 billion from $40 billion as the Fed replaces "Operation Twist" with outright asset purchases

(Read more: Fed Is Likely to Sustain Its Stimulus Program )

Under "Twist," the Fed sold short-term securities and bought long-term U.S. Treasury bonds. A plurality of investors now expects the Fed to replace "Twist" with $45 billion in additional asset purchases split between treasuries and mortgage-backed securities. That would add to the Fed's existing $40 billion QE program.

By the end of the year, respondents anticipate the Fed's $2.8 trillion balance sheet will grow by more than $700 billion; 35 percent say it will increase by $1 trillion or more. But in a sharp reversal from September, respondents are now overwhelmingly concerned that Fed purchases will begin to impair market functioning and pricing, a key concern for the Fed, which has argued that it could conduct its QE operations without reducing liquidity.

"They wrecked the money market and now their actions are wrecking the bond market." -Chris Rupkey, Bank of Tokyo-Mitsubishi

Chris Rupkey of Bank of Tokyo-Mitsubishi said the Fed "wrecked the money market and now their actions are wrecking the bond market... As long as they keep doing this it tells the public the economy is still not right in their view. This policy is starting to look like a mistake."

And by a 3-to-2 margin, investors believe that more QE will not lower the unemployment rate, which the Fed has specifically mentioned as a key aim of the program. Investors do, however, believe that QE will be successful at reducing bond yields and mortgage rates, a sign that Wall Street doesn't believe lower interest rates will reduce joblessness.

Marking the first time CNBC has asked the question, Wall Street believes that an unemployment rate of 6.5 percent and an inflation rate of 3.4 percent are the key levels that would prompt the Federal Reserve to halt its asset purchases. But Wall Street, by a slim 49 percent to 45 percent, does not believe the Fed will adopt explicit economic targets. If it does, 75 percent of respondents say it should be inflation compared with just 43 percent saying unemployment.

Markets still look for the Fed to remain on hold through 2015, although there was an increase in the percentage who see the Fed acting to tighten policy in 2014.

Rupkey, however, isn't sure we need to think about the future. He joked, "I think we are all doomed. 'Fiscal cliff' pales in importance against the end of the world forecast by the Mayan calendar. Get your affairs in order, this ship is going down."