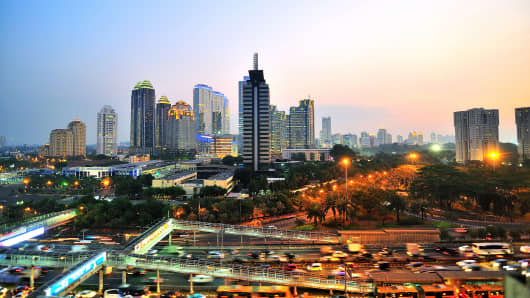 All 17 economists polled by Reuters had expected the central bank to hold the benchmark rate on Tuesday.

BI also said the intensity of rupiah depreciation is easing. This year, the rupiah has weakened 6 percent against the dollar to a three-year low.

One question now is whether Indonesia, which has grown strongly this year thanks to robust domestic demand and investment inflows, will face uncomfortably rising inflation next year - particularly as the government is expected to raise power prices.

However, 10 of the 17 economists in last week's poll said they expect the benchmark rate to remain at 5.75 percent, a record low, through 2013.

Gundy Cahyadi, economist at OCBC Bank in Singapore, said he expects BI to raise the policy rate to 6.25 percent by the end of 2013.

"This would serve well to sustain confidence on policy credibility and anchor inflationary expectations for a sustainable growth path," he said.

Some economists expect Bank Indonesia (BI) to hike its deposit facility rate to prop up the rupiah. But on Tuesday, BI made no change in that rate.

One factor weakening the rupiah has been sagging exports. In recent months, exports have been below year-earlier levels, due to poor global demand. In October, there was a record trade deficit of $1.54 billion, as exports fell more than expected and imports jumped due to increasing capital goods and oil demand.

Indonesia expects global uncertainties to keep hitting exports next year. The government has trimmed its forecast of 6.8 percent economic growth for 2013 instead to between 6.6 and 6.8 percent, deputy finance minister Anny Ratnawati said.

The annual consumer price index in November eased to 4.32 percent, from 4.61 percent a month earlier, as food prices declined.

But in 2013, the government is expected to lift subsidized power prices. It can also change petrol prices without seeking approval of parliament, which blocked hikes in early 2012.

According to BI, October broad money supply rose 18.3 percent from a year ago. In September, the on-year increase was 18.2 percent.

Recent economic data has shown that domestic demand, which makes up about 55 percent of the economy, remains buoyant.

Retail sales aren't expanding as quickly as before, but they still are showing hefty increases. In October, they were 19 percent higher than a year earlier, compared with September's 22 percent increase. Motorbike sales in November dropped 1 percent on a monthly basis but remained strong.