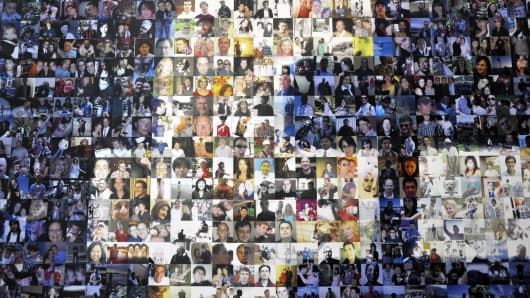 Where are employees most satisfied in their jobs? Beer tasters at Sam Adams? Photographers at Playboy? Shoppers for Saks? Mickey at Disneyland?

That's according to Glassdoor.com, the website where employees rate their own companies. For the second time in three years, Facebook has come out on top, with a 4.7 rating on a scale of one to five, meaning workers are generally "very satisfied."

Satisfied despite the bashing the company has taken both in the media and the stock market since the IPO.

"Wall Street dared to doubt Facebook, and Zuckerberg has turned it into an internal rallying cry," said Glassdoor co-founder and CEO Robert Hohman. "People have more faith in him than they did a year ago."

Hohman says Zuckerberg's approval rating has grown from 90 percent in 2011 to 99 percent now, putting him in a rare club that once included Steve Jobs.

Glassdoor came up with this year's list after combing through nearly a half million anonymous employee reviews of companies on its website (or alleged employees, Glassdoor works on the honor system).

Facebook workers praised the company for its fun culture, and they clearly trust founder Mark Zuckerberg. One project manager wrote about enjoying the "ability to work on a product that affects hundreds of millions of people," and "employees are given large responsibilities relatively early in their careers."

Coming in second for The Best Place to Work in 2013 is McKinsey & Co., followed by Riverbed Technology, Bain & Co. (falling from #1 last year) and MD Anderson Cancer Center.Both Riverbed and MD Anderson are new to the list, as is In-N-Out Burger, which debuted at #9 with a 4.2 rating.

At the very bottom of the top 50 list is Starbucks, with a 3.8 rating, still well into satisfied territory. However, last year Starbucks ranked #34, a space now taken over by Apple, which has tumbled 24 spots from 10th place in a single year.

Boy, when employees at Apple and Starbucks have lost enthusiasm, the Mayans really are onto something.

"It's getting harder for customer service and retail companies to do well on this list," said Hohman. Apple's rating hasn't changed in a year, it's stayed steady at 3.9, but so many other companies have moved ahead.

Which companies didn't make the list at all? In the tech sector, the lowest rated well known companies include Groupon, HP, and Netflix.

Yahoo is actually beginning to move up, with a 3.3 rating, and new CEO Marissa Mayer has an 86 percent approval rating.

There are some traditional American industries that were ranked well by workers. Companies which have made the list since it started in 2009 include Chevron (#13) and General Mills (#35). Who knew working for Big Oil and Big Food could be Big Fun? Glassdoor cites the work/life balance benefits at both companies, even if shares of both have underperformed the market this year.

So can we stop poking fun at the social networking monolith, considering the folks there are probably happier than most of us? Potentially richer, too? Plus they get to wear jeans and hoodies to work? I mean, does anyone at Facebook have anything bad to say about it?

(Read More: Facebook Will Disappear in 5 to 8 Years: Analyst)

Someone identifying him/herself as a Facebook Product Engineer wrote on Glassdoor, "It can be very stressful. You have to get used to all the media attention and mudslinging."