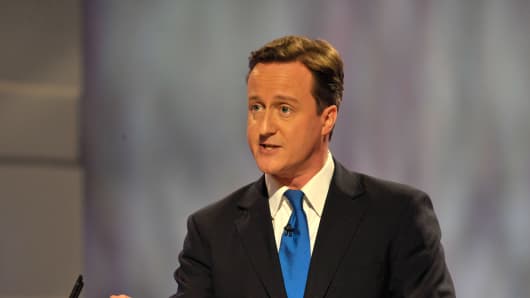 British Prime Minister David Cameron's attempts to win back powers from the European Union could damage the 27-nation bloc and its single market, European Council President Herman Van Rompuy said in an interview published on Thursday.

Cameron, trailing in opinion polls and under pressure from an anti-EU group within his Conservative party, wants to take advantage of the euro zone crisis to renegotiate Britain's relationship with Brussels and win more opt-outs from its rules.

Van Rompuy, whose council represents EU member states, told the Guardian newspaper that the bloc could fall apart if individual countries were allowed to pick and choose from its regulations.

His intervention indicates the difficulties Cameron faces in trying to silence his rebellious lawmakers by forging a new deal for Britain within the European Union.

"If every member state were able to cherry-pick those parts of existing policies that they most like, and opt out of those that they least like, the union in general, and the single market in particular, would soon unravel," Van Rompuy said.

"All member states can, and do, have particular requests and needs that are always taken into consideration as part of our deliberations. I do not expect any member state to seek to undermine the fundamentals of our co-operative system in Europe," Van Rompuy added.

Cameron has said he wants to agree a fresh contract with the European Union, to be approved by Britons in a referendum, while stopping short of demands from eurosceptic Conservatives for an "in or out" vote on Britain's membership.

Britain already enjoys a number of EU opt-outs, including retaining its own currency and keeping passport controls at borders, but many Conservatives want to go further by repatriating powers over social and employment laws.

Cameron is expected to detail his plans in a much-delayed speech on Europe in the new year. He heads a coalition government with the smaller and pro-EU Liberal Democrats, a relationship likely to postpone any EU referendum until after the next national election, due in 2015.

Along with the sluggish economy, Britain's ties with Europe will be one of the fiercest battlegrounds in the election. Polls suggest about half of Britons want to leave the European Union and a third want to stay in, with the number of those who want out rising.

Liberal Democrat leader and Deputy Prime Minister Nick Clegg said on Thursday that talk of a referendum on Britain's role in Europe was premature until the euro crisis was resolved.

"I still don't know what is the question we're supposed to be putting to the British people because we don't yet know what we're reacting to in terms of the further integration of the euro zone," he told the Guardian.