Used to Hardship, Latvia Accepts Austerity, and Its Pain Eases 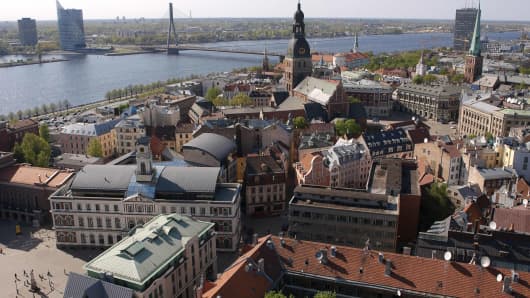 When a credit-fueled economic boom turned to bust in this tiny Baltic nation in 2008, Didzis Krumins, who ran a small architectural company, fired his staff one by one and then shut down the business. He watched in dismay as Latvia's misery deepened under a harsh austerity drive that scythed wages, jobs and state financing for schools and hospitals.

But instead of taking to the streets to protest the cuts, Mr. Krumins, whose newborn child, in the meantime, needed major surgery, bought a tractor and began hauling wood to heating plants that needed fuel. Then, as Latvia's economy began to pull out of its nose-dive, he returned to architecture and today employs 15 people — five more than he had before. "We have a different mentality here," he said.

Latvia, feted by fans of austerity as the country-that-can and an example for countries like Greece that can't, has provided a rare boost to champions of the proposition that pain pays.

Hardship has long been common here — and still is. But in just four years, the country has gone from the European Union's worst economic disaster zone to a model of what the International Monetary Fund hails as the healing properties of deep budget cuts. Latvia's economy, after shriveling by more than 20 percent from its peak, grew by about 5 percent last year, making it the best performer in the 27-nation European Union. Its budget deficit is down sharply and exports are soaring.

"We are here to celebrate your achievements," Christine Lagarde, the chief of the International Monetary Fund, told a conference in Riga, the capital, this past summer. The fund, which along with the European Union financed a $7.5 billion bailout for the country at the end of 2008, is "proud to have been part of Latvia's success story," she said.

When Latvia's economy first crumbled, it wrestled with many of the same problems faced since by other troubled European nations: a growing hole in government finances, a banking crisis, falling competitiveness and big debts — though most of these were private rather than public as in Greece.

Now its abrupt turn for the better has put a spotlight on a ticklish question for those who look to orthodox economics for a solution to Europe's wider economic woes: Instead of obeying any universal laws of economic gravity, do different people respond differently to the same forces?

Latvian businessmen applaud the government's approach but doubt it would work elsewhere.

"Economics is not a science. Most of it is in people's heads," said Normunds Bergs, chief executive of SAF Tehnika, a manufacturer that cut management salaries by 30 percent. "Science says that water starts to boil at 100 degrees Celsius; there is no such predictability in economics."

In Greece and Spain, cuts in salaries, jobs and state services have pushed tempers beyond the boiling point, with angry citizens staging frequent protests and strikes. Britain, Portugal, Italy and also Latvia's neighbor Lithuania, meanwhile, have bubbled with discontent over austerity.

But in Latvia, where the government laid off a third of its civil servants, slashed wages for the rest and sharply reduced support for hospitals, people mostly accepted the bitter medicine. Prime Minister Valdis Dombrovskis, who presided over the austerity, was re-elected, not thrown out of office, as many of his counterparts elsewhere have been.

The cuts calmed fears on financial markets that the country was about to go bankrupt, and this meant that the government and private companies could again get the loans they needed to stay afloat. At the same time, private businesses followed the government in slashing wages, which made the country's labor force more competitive by reducing the prices of its goods. As exports grew, companies began to rehire workers.

Economic gains have still left 30.9 percent of Latvia's population "severely materially deprived," according to 2011 data released in December by Eurostat, the European Union's statistics agency, second only to Bulgaria. Unemployment has fallen from more than 20 percent in early 2010, but was still 14.2 percent in the third quarter of 2012, according to Eurostat, and closer to 17 percent if "discouraged workers" are included. This is far below the more than 25 percent jobless rate in Greece and Spain but a serious problem nonetheless.

"I'm always asking people here, 'How can you put up with this?' " said Juris Calitis, a Latvian-born Anglican chaplain whose family fled Soviet occupation in the 1940s and who returned when the Soviet empire crumbled.

"It is really shocking," added Mr. Calitis, who runs a soup kitchen at his church in Riga's old town. Latvians, he said, "should be shouting in the streets," but "there is an acceptance of hard knocks."

Latvia has certainly had plenty of those, enduring Soviet, Nazi and then renewed Soviet rule, learning that discontent is best kept quiet. After Moscow relinquished control in 1991, decrepit Soviet-era plants shut down, gutting the industrial base. The economy contracted by nearly 50 percent.

The collapse of Latvia's largest bank in 1995 wiped out many people's savings. Latvia then was hit by debris from Russia's financial blowout in 1998. Then came a dizzying boom, fueled by a lending splurge by foreign, particularly Swedish, banks, followed by a catastrophic slump as credit froze when the global financial crisis swept into Europe in 2008.

"Conditions were very tough," recalled Mr. Dombrovskis, but few people resisted his argument that harsh austerity offered the only way out.

In contrast to much of Europe, Latvia today has no tradition of labor activism. "What can you achieve in the street? It is cold and snowing," said Peteris Krigers, president of the Free Trade Union Confederation of Latvia. Organizing strikes, he said, is nearly impossible. "It is seen as shameful for people who earn any salary, no matter how small, to go on strike."

Also largely absent are the leftist political forces that have opposed austerity elsewhere in Europe, or the rigid labor laws that protect job security and wage levels. In the second half of 2010, after less than 18 months of painful austerity, Latvia's economy began to grow again. Other European countries "should not miss this point," said the prime minister, noting that the "debate in Europe often goes the opposite way: that austerity destroys growth."

Yet the pain of many ordinary people continues.

"They say the crisis is over, but I don't feel that," said Marika Timma, a mother of three whose husband lost his job in construction when the property bubble burst. Ms. Timma used to work as a cleaner but quit when her wages were cut in half, to just $168 a month.

Several of her good friends have emigrated to Britain and Ireland to look for work. "They won't be coming back," she said.

Since 2008, Latvia has lost more than 5 percent of its population, mostly young people, to emigration. The recent exodus peaked in 2010, when 42,263 people moved abroad, a huge number in a country of just two million now, according to Mihails Hazans, a professor at the University of Latvia.

Alf Vanags, director of the Baltic International Center for Economic Policy Studies here, is skeptical. "The idea of a Latvian 'success story' is ridiculous," he said. "Latvia is not a model for anybody."

A better and more equitable way out of Latvia's troubles, he believes, would have been a devaluation of the currency, an option closed to Greece and 16 other countries that use the euro. Latvia kept its currency pegged to the euro, putting itself in much the same straitjacket as euro zone nations.

But Latvia's high pain threshold and unusually open economy set it apart, enabling a relentless squeezing of wages, said Morten Hansen, head of the economics department at the Stockholm School of Economics in Riga.

"You can only do this in a country that is willing to take serious pain for some time and has a dramatic flexibility in the labor market," he said. "The lesson of what Latvia has done is that there is no lesson."