Investors found further reason to dump shares of their once-darling Apple on Monday after a report raised concerns over demand for the iPhone 5.

Apple stock briefly dipped below $500 for the first time since February after Japan's Nikkei financial news service and The Wall Street Journal reported that the tech giant cut orders for parts on its iPhone 5 due to weaker-than-expected demand. According to the reports, Apple has asked Japan Display, Sharp and South Korea's LG Display to cut supplies of LCD panels in addition to other iPhone components in the first quarter.

But UBS and a handful of other firms noted that the report appeared to be old news, saying the article cites a notification from the company to suppliers last month. UBS has a "buy" rating on the stock with a price target of $700 a share.

"The stock appears to be a battle between peaking growth and margins and a low valuation," UBS analyst Steven Milunovich wrote in a note. "Momentum tends to win out in tech, and the stock remains under pressure." (Read More: Yoshikami: Loving Apple Stock Is a Mistake ) 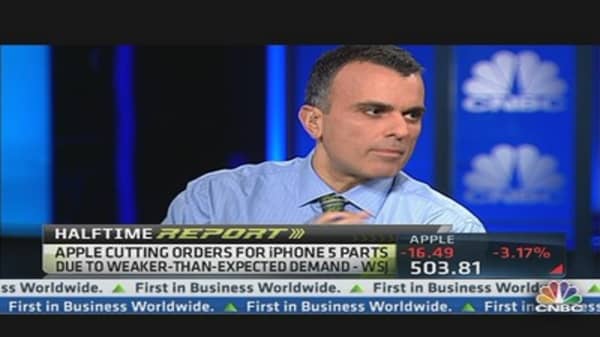 In the last few months, analysts have been raising red flags over sales of the iPhone 5, which debuted in September, citing lowered expectations and increasing competition from the likes of Samsung. Apple shares hit an all-time high of $705 a share following the iPhone 5 release and have shed roughly a quarter of their value since.

Despite Apple's heavy 15-percent weight on the Nasdaq 100, the index has managed to outperform the stock, logging a gain of nearly 5 percent in the last three months against Apple's sharp 15-percent drop.

"When a tech stock is coming under margin pressure, after that big pullback, it's a sideways stock for some time, and we think it's going to be the case for Apple for a while," said Citigroup analyst Glen Yeung, who cut his rating on Apple to "neutral" in December. "A year ago or two, Apple had no competition and now they do." 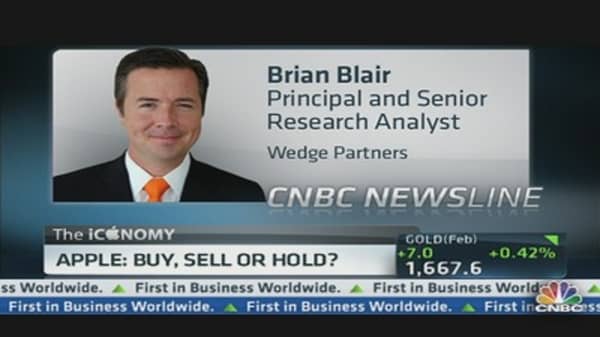 "Expectations are actually low and getting lower. We believe that many investors fear iPhone sales will be relatively flat this year and that there will be no move into TV that moves the needle," wrote Barclays. "Perhaps more importantly, we also believe CY13 is a critical year for Apple in its battle against Google (Android, Maps) and Samsung."

Earlier this month, Samsung announced that its Galaxy S smartphone sales topped 100 million since its launch in May 2010. Samsung is also expected to widen its lead over Apple this year as the South Korean company is projected to sell 290 million smartphones in 2013 versus iPhone sales of 180 million, according to Strategy Analytics. (Read More: What's the Dominant Company at CES This Year? )

Still, senior tech analyst Peter Misek of Jefferies, who has a "buy" rating on the stock and a price target of $800, said Apple trades at a cheap valuation and added that product launches expected later this year could drive the stock higher. (Read More: Weaker iPhone 5 Sales 'Old News,' Apple to $800: Analyst)

"[If they do a deal,] we think demand could then be a lot stronger," said Misek. "China Mobile's big advantage is that it serves the tier 2 to 5 cities better than [rivals], so it would expand China's market by three times. China could then become the largest market for Apple within 24 months if that happened."