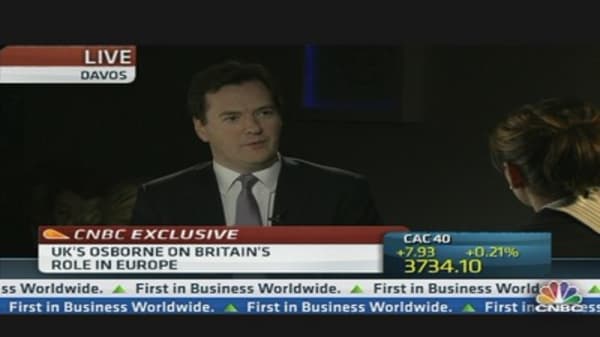 Britain's Chancellor of the Exchequer, George Osborne, defended his government's austerity program, a day after the chief economist of the International Monetary Fund (IMF) said the U.K. government should ease up on austerity.

"I do not think it is right to abandon a credible deficit plan... You cannot have a competitive, successful economy that people want to invest in if you cannot pay your way," Osborne told CNBC at the World Economic Forum in Davos, Switzerland.

He said that jobs were being created and the economy was being rebalanced.

"We are walking a difficult road, but we are heading in the right direction… Jobs are being created - over one million jobs in the private sector."

Osborne added: "There is always going to be a fierce debate about which bits of government should be cut."

He said he aimed to safeguard investment in education and science as areas that could support the economy, but was taking "tough decisions" on welfare spending.

The British pound has fallen in recent weeks against both the euro and the dollar after weak retail sales and inflation data raised worries the economy could slip back into recession later this year.

There are also growing concerns the country may lose its triple-A credit rating.

Osborne also reiterated British Prime Minister David Cameron's case, made earlier on Thursday, for a free trade agreement between the European Union and the United States, as well as other large trading blocs.

"We need to make sure we get the institutions of the European Union working to our best advantage," said Osborne.

Osborne said the U.K. was not backing out of Europe, but wanted a more competitive bloc. On Wednesday, Cameron announced that he would hold a referendum on Britain's membership of the EU if he were elected Prime Minister in the next election.

"I am arguing for reform in Europe, and Britain being part of that reformed Europe, but you cannot ignore the growing gap between the governed, and those doing the governing," said Osborne.

"Europe has to become a competitive place where people can succeed."