Senate Leaders in Deal to (Sort of) Muzzle Filibusters 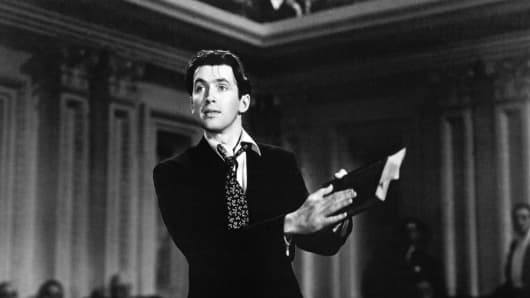 The Senate's senior Democrat and Republican reached a tentative agreement Thursday to impose modest limits on the filibuster, the delaying tactic that minority parties have long used to kill legislation.

Sens. Harry Reid and Mitch McConnell reached the deal after weeks of negotiations. They measure would reduce -- but not eliminate -- the number of times opponents can use filibusters on legislation and limit the time spent debating some bills and nominations. If acceptable to most lawmakers, the Senate was expected to approve the restrictions later.

Under the agreement, 60 votes in the 100-member chamber would still be needed to end a filibuster despite calls by some lawmakers to lower the figure. A number of Democrats complain that existing rules have let Republicans block much of President Barack Obama's agenda with as few as 40 votes.

The pact does not represent a dramatic reworking of Senate rules and leaves the minority party with far more power than it has in the House, where procedures allow a united majority party to muscle through its priorities.

But it could streamline some of the Senate's work and it would avoid what could have been prolonged, nasty battling between the two parties if Democrats -- frustrated by the GOP's growing reliance on the delays -- tried ramming through more decisive changes.

The curbs on filibusters fall short of what Reid, D-Nev., initially said he favored months ago. He wanted to completely ban the tactic's use when the Senate tries to begin debating a measure, and he threatened to use Democrats' majority in the Senate to simply impose it.

That tactic is called the "nuclear option" because of the bitter partisan warfare it would likely trigger in the chamber, potentially halting almost any business the Senate tried to conduct.

The restrictions also fall far short of what some of the Senate's newer Democrats were demanding. Their proposals included requiring filibustering senators to actually debate on the chamber's floor, a practice immortalized in the film "Mr. Smith Goes to Washington" but seldom used in recent years.

The No. 2 Senate Democratic leader, Richard Durbin of Illinois, said this week that Democrats lacked enough votes to force that proposal through the Senate.

Durbin said Thursday that the tentative deal was "great for the Senate," and said lawmakers who wanted tighter curbs would have to settle for less.

"That's how this world works," Durbin told reporters. "People start aspiring at very high levels, then you get a negotiation, then you reach something called compromise. And I think we are at that point."

Tight restraints on filibusters were championed by less-senior Democrats like Sens. Jeff Merkley, D-Ore., and Tom Udall, D-N.M, frustrated with the chamber's often glacial debates and the ability of the minority -- these days Republicans -- to kill bills with less than majority Senate support.

More veteran lawmakers like Sen. Carl Levin, D-Mich., were reluctant to stifle the tactic, mindful that his party could find itself in the minority after any election and would want to be able to use the maneuvers.

"It is bipartisan, it will give great momentum to working on a bipartisan basis here in the Senate and it will get rid of the major roadblocks that gridlock this Senate," Levin said of the tentative deal.

But at least one long-serving Democrat expressed dissatisfaction, saying the pact would continue to let lawmakers in the minority force those in the majority to get 60 votes to prevail.

"It stands the principle of majority rule on its head," said Sen. Tom Harkin, D-Iowa.

The liberal group Common Cause, which has filed a lawsuit challenging the constitutionality of the filibuster, criticized Reid for the agreement, saying the senator "has gone missing in the fight for filibuster reform."

Democrats say Republican use of the tactic has become almost routine and far too frequent. Republicans say they use it because Reid often blocks them from offering amendments.

As part of the agreement, filibusters could be avoided when the Senate tries beginning debate on a bill or nomination. In return, the majority leader would have to allow each party to offer at least two amendments -- addressing a major complaint of Republicans that their amendments are often shut out.

In addition, once the Senate votes to limit debate on certain nominations -- district court judges and administration posts below Cabinet level -- the debate would be limited to two hours, far below the 30 hours now allowed. The proposal was aimed at speeding the time spent on such nominations.

In addition, instead of three separate opportunities for opponents of a bill to wage filibusters to block a Senate vote allowing the chamber to try writing compromise legislation with the House, there would only be one such filibuster allowed.

Those are the three highest number of cloture votes in any Congress since the Senate started allowing such votes to end filibusters nearly 100 years ago.