In Hard Economy for All Ages, Older Isn’t Better—It’s Brutal 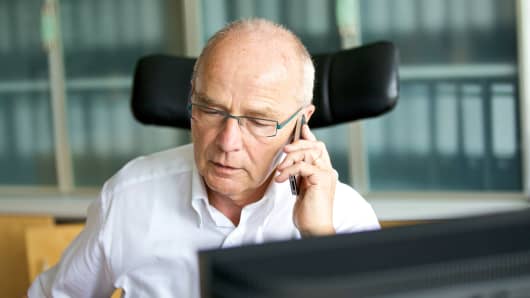 Young graduates are in debt, out of work and on their parents' couches. People in their 30s and 40s can't afford to buy homes or have children. Retirees are earning near-zero interest on their savings.

In the current listless economy, every generation has a claim to having been most injured. But the Labor Department's latest jobs snapshot and other recent data reports present a strong case for crowning baby boomers as the greatest victims of the recession and its grim aftermath.

These Americans in their 50s and early 60s — those near retirement age who do not yet have access to Medicare and Social Security — have lost the most earnings power of any age group, with their household incomes 10 percent below what they made when the recovery began three years ago, according to Sentier Research, a data analysis company.

Their retirement savings and home values fell sharply at the worst possible time: just before they needed to cash out. They are supporting both aged parents and unemployed young-adult children, earning them the inauspicious nickname "Generation Squeeze."

New research suggests that they may die sooner, because their health, income security and mental well-being were battered by recession at a crucial time in their lives. A recent study by economists at Wellesley College found that people who lost their jobs in the few years before becoming eligible for Social Security lost up to three years from their life expectancy, largely because they no longer had access to affordable health care.

"If I break my wrist, I lose my house," said Susan Zimmerman, 62, a freelance writer in Cleveland, of the distress that a medical emergency would wreak upon her finances and her quality of life. None of the three part-time jobs she has cobbled together pay benefits, and she says she is counting the days until she becomes eligible for Medicare.

In the meantime, Ms. Zimmerman has fashioned her own regimen of home remedies — including eating blue cheese instead of taking penicillin and consuming plenty of orange juice, red wine, coffee and whatever else the latest longevity studies recommend — to maintain her health, which she must do if she wants to continue paying the bills.

As common as that sentiment is, the job market has been especially unkind to older workers.

Unemployment rates for Americans nearing retirement are far lower than those for young people, who are recently out of school, with fewer skills and a shorter work history. But once out of a job, older workers have a much harder time finding another one. Over the last year, the average duration of unemployment for older people was 53 weeks, compared with 19 weeks for teenagers, according to the Labor Department's jobs report released on Friday.

The lengthy process is partly because older workers are more likely to have been laid off from industries that are downsizing, like manufacturing. Compared with the rest of the population, older people are also more likely to own their own homes and be less mobile than renters, who can move to new job markets.

Older workers are more likely to have a disability of some sort, perhaps limiting the range of jobs that offer realistic choices. They may also be less inclined, at least initially, to take jobs that pay far less than their old positions.

Displaced boomers also believe they are victims of age discrimination, because employers can easily find a young, energetic worker who will accept lower pay and who can potentially stick around for decades rather than a few years.

"When you're older, they just see gray hair and they write you off," said Arynita Armstrong, 60, of Willis, Tex. She has been looking for work for five years since losing her job at a mortgage company. "They're afraid to hire you, because they think you're a health risk. You know, you might make their premiums go up. They think it'll cost more money to invest in training you than it's worth it because you might retire in five years.

"Not that they say any of this to your face," she added.

When older workers do find re-employment, the compensation is usually not up to the level of their previous jobs, according to data from the Heldrich Center for Workforce Development at Rutgers University.

In a survey by the center of older workers who were laid off during the recession, just one in six had found another job, and half of that group had accepted pay cuts. Fourteen percent of the re-employed said the pay in their new job was less than half what they earned in their previous job.

"I just say to myself: 'Why me? What have I done to deserve this?' " said John Agati, 56, of Norwalk, Conn., whose last full-time job, as a merchandise buyer and product developer, ended four years ago when his employer went out of business.

That position paid $90,000, and his rsum lists stints at companies like American Express, Disney and USA Networks. Since being laid off, though, he has worked a series of part-time, low-wage, temporary positions, including selling shoes at Lord & Taylor and making sales calls for a limo company.

The last few years have taken a toll not only on his family's finances, but also on his feelings of self-worth.

He said he cannot afford to go back to school, as many younger people without jobs have done. Even if he could afford it, economists say it is unclear whether older workers like him benefit much from more education.

"It just doesn't make sense to offer retraining for people 55 and older," said Daniel Hamermesh, an economics professor at the University of Texas in Austin. "Discrimination by age, long-term unemployment, the fact that they're now at the end of the hiring queue, the lack of time horizon just does not make it sensible to invest in them."

Many displaced older workers are taking this message to heart and leaving the labor force entirely.

The share of older people applying for Social Security early spiked during the recession as people sought whatever income they could find. The penalty they will pay is permanent, as retirees who take benefits at age 62 — as Ms. Zimmerman did, to help make her mortgage payments — will receive 30 percent less in each month's check for the rest of their lives than they would if they had waited until full retirement age (66 for those born after 1942).

Those not yet eligible for Social Security are increasingly applying for another, comparable kind of income support that often goes to people who expect never to work again: disability benefits. More than one in eight people in their late 50s is now on some form of federal disability insurance program, according to Mark Duggan, chairman of the department of business economics and public policy at the University of Pennsylvania's Wharton School.

The very oldest Americans, of course, were battered by some of the same ill winds that tormented those now nearing retirement, but at least the most senior were cushioned by a more readily available social safety net. More important, in a statistical twist, they may have actually benefited from the financial crisis in the most fundamental way: prolonged lives.

Death rates for people over 65 have historically fallen during recessions, according to a November 2011 study by economists at the University of California, Davis. Why? The researchers argue that weak job markets push more workers into accepting relatively undesirable work at nursing homes, leading to better care for residents.