Russia Says It Is Moving Away From Currency Manipulation

As tension over exchange rates grows and central bankers across the globe try to cool talk of a "currency war", Russia on Wednesday denied it was manipulating its currency.

"We are actively moving away from any manipulation of the currency," Alexei Moiseev, Russia's Deputy Finance Minister told CNBC ahead of the G20 meeting in Moscow on Wednesday. "Last fall, the central bank officially declared that Russia is moving towards a flexible exchange rate so we have a target of 2015 to commit to make no interventions in the exchange market. "

Russia has been accused of maintaining barriers to free trade, despite the fact that the country joined the World Trade Organization in 2012. Moiseev denied that this was tantamount to a currency war by proxy.

The country has been slow to remove trade tariffs on imports for the national industries it views as most vulnerable to foreign competition, such as the automobile sector, but Moiseev insisted his country was playing by the rules.

"We are definitely [playing] it by the book, " he said. "We're definitely not violating the rules themselves and everybody does it to a certain extent. This is our first year in the WTO and there will be a transition period…we need to learn how to live under WTO rules, but I can tell you that everything we do we double check [with the organization]."

Confusion over the G7's policy to combat the risks of a "currency war" has caused volatility in the currency markets this week. 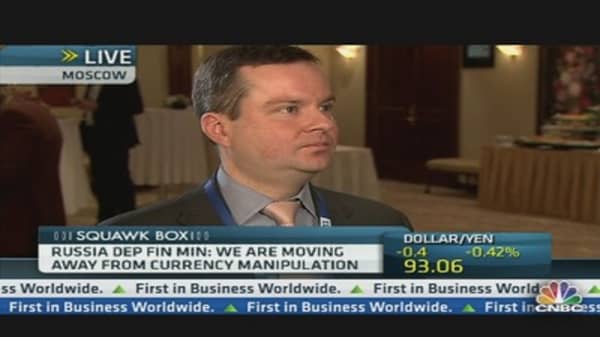 On Tuesday, the G7 released a statement stating that fiscal and monetary policies must not be aimed at devaluing currencies while on the same day a U.S. official appeared instead to give the "green light" to monetary easing by Japan's central bank.

Moiseev said that the G7, of which Russia is not a member, should not be making policy decisions or announcements on foreign exchange policies. He added that for Russia, the G20 was a more appropriate forum for discussing currency wars than the G7.

"This kind of decision should have been discussed on the G20 platform," he said. "This is G20 week and the very reason that the focus in developing economic policy has shifted to the G20 is that the G7 no longer represents a sufficient proportion of the world's financial markets and economies."

Russia's finance ministry is keen to stimulate growth. Inflation hit a 15-month high of 7.1 percent (year-on-year) in January 2013 and economic growth slowed in 2012 to 3.4 percent from 4.2 percent growth in 2011. However, the central bank decided against easing borrowing costs on Tuesday, holding the refinancing rate at 8.25 percent for the fifth month in a row.

(Read More: Why Miami Is Becoming the "Russia Riviera"?)

Moiseev told CNBC that "lower inflation is very much a priority" for the ministry and central bank.