What Travelers Can Expect With American-US Airways Merger 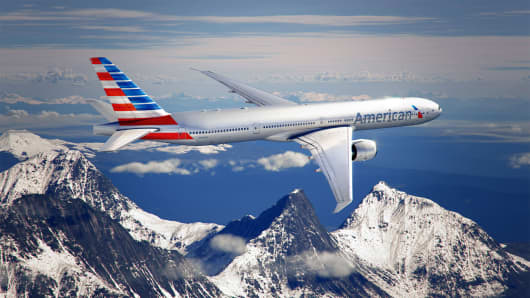 While American Airlines and US Airways announced plans to merge Thursday, it will be several months—if not years—before passengers see any significant impact.

Passengers with existing tickets on American or US Airways—and members of both frequent flier programs—shouldn't fret. No changes will come anytime soon. (Read more: What an American-US Airways Merger Would Mean for Frequent-Fliers)

American's parent company, AMR Corp., is still under bankruptcy protection and will need the court to approve the deal. US Airways shareholders will also have to vote for a merger. Then the Department of Transportation and the Justice Department must sign off. Finally, once a deal closes, the new company could operate two separate airlines for a number of years.

When the airlines finally do merge, here's what passengers can expect.

During the past five years, the airline industry has seen the combinations of Delta with Northwest, United with Continental and Southwest Airlines with AirTran. Further consolidation is likely to raise airfares. The price of a domestic round-trip flight has climbed more than 11 percent since 2009, when adjusted for inflation, according to the Bureau of Transportation Statistics.

The merger will give a combined American and US Airways the ability to increase fares. United, Delta and Southwest would be likely to follow. Although it could also pave the way for further expansion by discount airlines such as Spirit Airlines and Allegiant.

Your miles will be safe. After the merger is approved, the two airlines will likely combine the miles into one program and elite status from one airline will likely be honored on the other. That puts the occasional traveler closer to rewards. (Read more: How Flying, Just for the Miles, Can Pay Off)

The merged carrier will continue American's participation in the oneworld alliance, which was founded by American, British Airways, Cathay Pacific and Qantas. Today, it has 12 airlines including Finnair, Royal Jordanian and Japan Airlines. US Airways will leave the Star Alliance, which includes rival United Airlines, Lufthansa, Air Canada and 24 other airlines. Alliances allow passengers to earn and redeem miles on partner airlines.

A key reason for merging is to link both airlines' networks, creating a system on par with Delta Air Lines and United.

There is little overlap between the two airlines' existing routes. The combined carrier will offer more than 6,700 daily flights to 336 destinations in 56 countries, making it more attractive to companies seeking to fly employees around the globe with few connections.

The combined carrier will have considerable presence in New York, Philadelphia, Washington, Charlotte, Miami, Chicago, Dallas, Phoenix and Los Angeles. It is unclear how many of those cities will keep their levels of service. In past mergers, airlines have promised not to close any hubs but have gone ahead and dramatically reduced service in once-key cities.

The merger of two airlines often means confusion and hassle for customers. Which terminal or ticket counter do they go to for check in? If there is a problem with a ticket, which company should they call?

For a while, United and Continental were issuing two confirmation numbers for each ticket so either airline's staff could make changes. Problems with the integration of their frequent flier programs angered many loyal road warriors and computer glitches caused repeated flight delays. (Read more: For United, Big Problems at Biggest Airline)

It could be months, if not years, until all American and US Airways planes get a uniform paint job.

"These things are never as seamless as they seem," said Thomas Lawton, a professor of business administration at Dartmouth College's Tuck School of business. "There will probably be some initial teething problems."