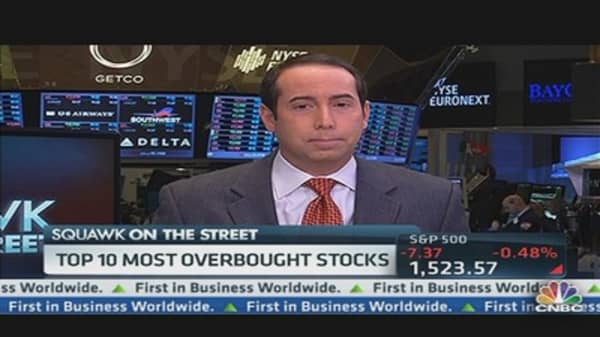 On the macro level, the S&P 500 is not extremely overbought said Greg Troccoli, president and founder of Chart Lab Pro. However, he told CNBC's "Squawk on the Street" there are certain stocks that are ripe for profit-taking or even establishing short positions.

Looking at S&P 500 data over an 18-year period, Troccoli's firm ran a proprietary algorithm and expects that the current rally could last for "another month or two."

"If you look over the last couple months, what has led is financials and health care," Troccoli said. "We tried to identify in those two sectors a certain amount of stocks that we thought were overbought. Those two areas we thought presented shorting opportunities or were at least places you could take profits."

For example, Troccoli's algorithm picked out Cigna as an overbought stock. "A counter-trend indicator in the algorithm was telling us that Cingna was overbought," he said, and over the past few days the stock has sold off. Troccoli pointed to this example to demonstrate the effectiveness of Chart Lab's algorithm.

Based on the algorithm from Chartlab Pro, here are the 10 most overbought stocks in the market right now:

—By CNBC's Paul Toscano. Follow him on Twitter and get the latest stories from "Squawk on the Street" @ToscanoPaul