The bull market's latest run, which sent the Dow Jones Industrial Average soaring past its 2007 record high, may have some cheering but traders say some of the stocks leading it are riskier bets, a sign that a pullback could be ahead.

Some of the names they cite include: Netflix, MBIA, Best Buy and Zynga.

"It used to be a joke on trading desks that when the mortgage insurers started rallying, the markets were ready to turn lower," said Enis Taner, global marcro editor for RiskReversal.com. "They're the real long-term trash." 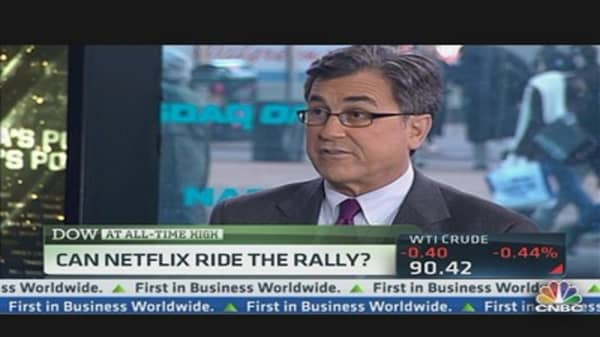 MBIA, an insurer of mortgage securities and other financial products, is up more than 60 percent this year. The company, which almost went under during the financial crisis, is up 20 percent this week alone.

Based on a search of all U.S. stocks with a market value above $2 billion, Netflix is the biggest winner of 2013 so far, with the price doubling on a wave of enthusiasm about new distribution deals and its own original content.

"They have a long way to go to justify this valuation," said Michael Pachter, a Netflix analyst for Wedbush Securities. "This is a worse company than it was two years ago."

Troubled retailer Best Buy is up more than 60 percent this year on the hopes of a turnaround or a buyout. Zynga shares have posted a 50 percent jump in 2013 after Nevada and New Jersey legalized online gaming, a market for which the game-maker is trying to become the interface in those states.

To be sure, not all investors believe the buying of these so-called riskier names are a sign of a last gasp for the bull market.

"To me, it's a sign of the early phase of another run because this is where people go first for beta," said Stephen Weiss of Short Hills Capital. "Plus, Best Buy is a classic early-cycle, consumer stock."

For the best market insight, catch "Fast Money" at 5 p.m. ET, and the "Halftime Report" at 12 noon ET each weekday on CNBC. Follow @CNBCMelloy on Twitter.