How Your Retirement Package Compares to Members of Congress 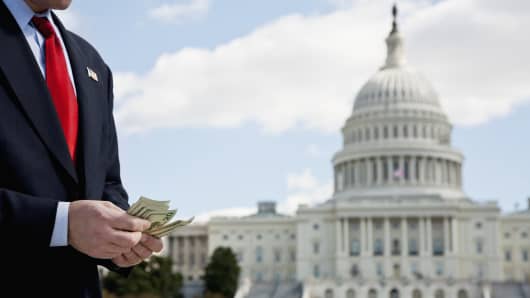 While extending the payroll tax cut through the end of last year, members of Congress last fall took what many feel was a long overdue whack at the cost of their retirement plan. They bumped up the rate at which federal employees contribute to their pension plan, saving an estimated $15 billion over the next 11 years.

They also made sure that none of the increase applied to themselves. Anyone in service before the law went into effect would pay into the pension plan at the old rate.

For all the talk you hear from Capitol Hill about running government more like a business, Congress has a retirement plan that would make any Fortune 500 executive blush. Members can retire younger, having contributed fewer of their own dollars, than almost any worker in the country — even more than the generous terms other federal workers get.

At a time when traditional pensions are disappearing and many workers are struggling to save for retirement, the Federal Employees' Retirement System (FERS), an old-school defined benefit pension program, pays 215 former congressmen and women an average of $39,576, for an average of 16 years of service, according to a recent Congressional Research Service report.

That's about what the average private-sector worker makes in retirement from all sources after a lifetime of work, according to the Employees Benefits Research Institute. The average income that worker gets from a pension is about $8,800 — if they have one. In 2010, fewer than 15 percent of private sector employees were enrolled in a defined-benefit pension.

"It's not keeping pace with what's happening in the private sector," said Veronique de Rugy, a senior researcher with George Mason University's Mercatus Center. "It's not sustainable."

It's inaccurate, in fact, to refer a single retirement plan, since any senator or representative elected after 1986 has access to three: Social Security, a 401(k) program that matches 5 percent of their contributions up to $17,500, and FERS, which as the name implies covers anyone paid from the federal till.

FERS alone is a plan any U.S. worker would envy. As Jim Kessler, co-founder of the think tank Third Way and a former congressional aide, said, "It's not wrong to have three plans, but the matching is one-to-one for two of them and the other [FERS] is one-to-14."

As a result, all federal employees get a return on their FERS contributions at a rate that's almost double what other workers do. (See chart.) But thanks to a faster accrual rate granted to elected employees—how fast the value of their benefits pile up—members of Congress even get a higher percentage payout on FERS for the same time served than other federal workers do.

According to calculations by Pete Sepp, executive vice president of the National Taxpayers Union, who has been tracking congressional benefits for decades, an executive branch employee with 10 years of service and who is retiring at age 62 this year would begin his pension at roughly $15,600. But a member of Congress of identical age, salary and service would begin at approximately $26,600, reflecting his higher contribution. But for his extra $11,000 in the first year's benefit, the lawmaker will have contributed only $8,350 more to the plan.

Defenders of the system point out that elected politicians have less job security than appointees like our executive branch workers. Sepp doesn't buy it. "Not only do you get a lot more in benefits for the extra you pay," he said, "but how many Cabinet secretaries stay in government for even eight years?"

Some critics say congressional retirement plans are not only too numerous and too generous, but the wrong kind. One of them is Republican Rep. Mike Coffman, who has put forward a bill with a fellow Coloradan, Democrat Jared Polis, that would end FERS.

"It makes no sense for Congress to continue to reward itself using taxpayer dollars, with a defined benefit plan when ... much of the country has moved to a defined contribution plan like a 401K," Coffman said in a statement earlier this year.

But as Washington is consumed with the sequester, the chances that Coffman and Polis' bill, or the $25 million we spend to support our congressional retirees, will get much notice. More pundits have teed off on the fact that our senators and representatives—the very people charged with averting the automatic cuts to the federal budget—are among the few federal employees who won't be touched by them.

Congress didn't enjoy plush pensions until 1946, when it was thought that a gold-plated plan would induce members to cede their seats to young men who had been galvanized by the war. But if the current deal is no longer gold-plated, said Sepp, "it's silver-plated, and it hasn't been attractive enough to get them rotated out of office."

(Read More: Rarity: House, Senate Work on Budget at Once)