How to Win Your March Madness Pool 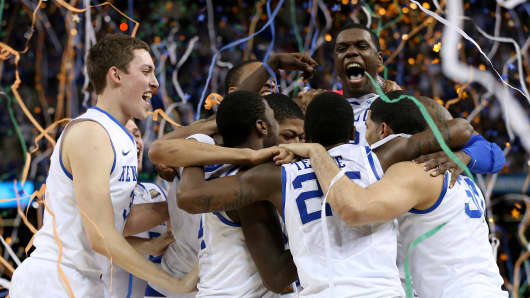 Okay, college sports fans, it's March Madness time. That means putting on your thinking caps, sharpening those pencils, grabbing an eraser or two and filling out your pool brackets for the NCAA basketball tournaments. (Use a pen at your own risk.)

We're saying tournaments because it's not just the men that play for a title. The women of college basketball have their tourney this time of the year too.

But most likely, the majority of pools at work, among friends or online, will focus on the men.

Some 57 percent of workplaces will have a pool this year, according to the Society of Resource Management. And about $3 billion will be put into those pools. Of course, sports betting is illegal in most states. Currently only Oregon, Delaware, Montana, and of course Nevada, allow it. (New Jersey's been trying, but so far, it's a no go.)

However, most people look the other way when it comes to the NCAA. So chances of getting busted for slipping the pool organizer a few dollars for your entry are slim to say the least.

Many analysts say there's no dominant team this year in college basketball. The teams ranked number one in the coach and sports writer polls have changed nearly as often as the price of gasoline. It's tough to even find a surefire favorite.

Before we get into some winning tips for your pool, here's a short refresher course. The men's tourney begins on March 19, with the championship game on April 8. The women's will be played from March 23 through April 9, 2013

Sixty-eight men's teams and 64 women's teams make their tournaments. They are seeded or ranked from 1-16 in four regions around the country based on several factors including win-loss record, playing schedule and team conference play.

This selection process often creates controversy among fans and analysts over where teams are ranked and what region they are placed in. We don't have time to get into that here; it's a whole story unto itself.

There are six rounds of games (with one extra play in round for men), usually with a top seed playing the lowest seed, and the loser being eliminated from the tournament. It's win or go home.

So with that said, what's the best way to slam dunk your rivals at work and walk away with your own championship crown? We got some experts and self-described stat geeks to weigh in.

"You have to take this somewhat seriously if you want to win," said Brad Carlin, a professor of bio statistics at the University of Minnesota who has co-authored papers on the NCAA tournament probabilities.

"Don't pick a team because you like the color of their shorts. You might as well just buy a lottery ticket then. Pick intelligently," said Carlin.

There's plenty of research out there on college teams like the rating percentage index, or RPI,. This ranks teams based on their win percentage and strength of schedule and how they might fare against other teams.

Constantly updated, the current ranking (subject to change) has Duke at the top followed by New Mexico, Louisville, Miami, Indiana, Gonzaga, Florida and Kansas. Most people might not think of New Mexico as even a possible NCAA champion but the RPI seems to indicate otherwise and might be a good choice, at least in the first few rounds.

Other information you may want to know are player injuries and where the games are played. Some consider a UCLA Bruin team playing in the West region a better bet than if they are seeded in the East and have to travel across the country.

Once you've done your homework, Carlin said the way to start is from the inside out.

"Pick who you think will in the tournament, be in the final four and then fill in brackets back to the first games. That way you won't sacrifice as many good teams too early," Carlin said.

You're looking for teams that are usually ranked in the top five or six before the tournament starts, according to Carlin.

As for dark horses or those considered with a slim chance of advancing but become fan favorites, Carlin has a word of caution.

"Cindarella teams don't usually make it to the ball," Carlin explained "Most of the time half the number one seeds in the tournament make the final four, so think top seeds as well as teams seeded three and four."

But at the same time, it's good to be a contrarian, said Jarad Niemi, a professor of statistics at Iowa State University.

"Don't necessarily take the top teams because that is who everybody will pick," said Niemi. "Instead, pick the third or fourth number one seeds or one of the top number two seeds."

An example of a good contrarian pick is Duke, said Niemi.

"People love to hate Duke, along with other schools and people will avoid picking the Blue Devils at any cost," Niemi said.

"But that makes it a good contrarian move even if they are likely a number one seed," argued Niemi. "Remember, contrarian is only relative to what your other contestants are doing."

Niemi explained it's key to take into account how your pool is set up when it comes to scoring points for each correct selection.The idea is to not necessarily predict the right outcomes of the games but where you can gain advantage over your fellow contestants.

"My departmental pool has a scoring scheme that gives correct picks; one point in the round of 64, two points in the round of 32 and four points for the regional games plus the difference in seeds if the underdog wins," explained Niemi.

"In this type of pool, you would be best to pick underdogs in the first and even the second rounds. For example, if you pick a 12 seed to beat a five in the first round—everybody's favorite upset—you have the possibility of gaining eight points rather than just one," said Niemi.

(Read More: Watch Out Yankees and Red Sox, It's a New Era in Baseball)

Certainly there are other tips: trusting your own instincts or listening to the TV analysts if you are so inclined and avoiding picking upsets of a 16 seed over a one seed in the first round. In the last 25 years of tournament play, that's never happened.

And another way is to turn to the gambling pros, said Doug Drinen, associate professor of math at the University of the South in Tennessee.

"The quickest and easiest way to fill out a reasonable bracket is to check the Vegas odds of each team winning the tournament, and fill in each slot in your bracket with the team that Vegas thinks has a better chance of winning it all," said Drinen. "They know how good a team is."

But if all this gives you a headache, there's an easier way, according to the experts. Just go to poologic.com and they'll do all the work for you. Just put in a team you want to win and they'll figure out the brackets for free.