Stocks Could Hit New High With US Data on a Roll 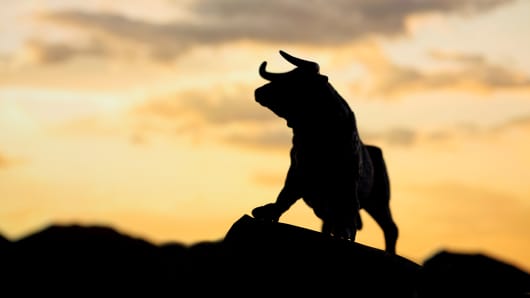 Stocks could end the week with a record close in the S&P 500, setting up the index for a run at its all-time high in the not too distant future.

The S&P closed Thursday with an 8-point gain at 1563, just two points below its record 1565 close, set in 2007. The Dow, on a tear since it burst through its high last Tuesday, ended at a record high for a tenth day, the longest winning streak since 1996. The Dow was up 83 points Thursday at 14,539. Stocks are on track for their best first quarter since 1998.

"I would say it's very realistic to say the S&P could go up 2-3/4 points in the first half hour," said Randy Frederick, managing director of active trading and derivatives at Charles Schwab. Frederick said the market could be a little more volatile because of Friday's monthly expiration of options and futures. "If it's not tomorrow, it's going to be within a couple of days for sure."

While the closing high is important, traders are more focused on whether the S&P can retake the intra-day high of 1576, set in October 2007.

Bank stocks will be a focus for markets Friday, after the Fed ruled Thursday on bank capital plans.

The news was released after the market close, and banks immediately hiked dividends and announced share buyback programs. Bank of America stock was more than four percent higher, after the company said the Fed did not object to its capital plan. Bank of America did not request to boost its dividend, but it did say it was planning to repurchase $5 billion in stock.

But two leading institutions, J.P. Morgan and Goldman Sachs were both required to submit new plans to address what regulators said were weaknesses in planning. But the Fed did not object to their capital plans. Goldman Sachs was down more than 2 percent in late trading, and JP Morgan Chase was down 2.5 percent.

JP Morgan is also likely to be in the headlines Friday, when executives, including former CIO Ina Drew, appear at a Congressional hearing to explain the "whale trades" that cost the firm billions.

A Senate report shows that senior managers at JPMorgan, including Drew, were told about the bad derivatives bets that cost the bank $6.2 billion but did little to rein them in.

The S&P financial sector was 0.6 percent higher Thursday, with JP Morgan, Bank of America and Citigroup all higher. The sector has been leading the market's gains since the New Year began and is the second best sector, with a 12.1 percent gain, since the start of the year. The Dow is up nearly 11 percent since the beginning of the year, and the S&P is up 9.6 percent. The Nasdaq finished up 13 Thursday at 3258, and is up 7.9 percent for the year.

U.S. data has been on a roll, with retail sales particularly strong this week and Thursday's weekly unemployment claims lower than expected, at 332,000, down for a third week. The better data has been sending bond yields higher, and Thursday's 30-year bond auction saw the highest yields at auction in a year. The $13 billion auction was at a yield of 3.248 percent.

Economists have been bumping up their GDP forecasts, with several now at 3 percent for the first quarter. For perspective, the fourth quarter grew at 0.1 percent though the number is likely to be revised slightly higher.

"We've seen some better economic data. It's not like we can declare victory and go home, but it seems like the consumer is stronger even in the face of these tax increases," said Nathan Sheets, global head of international Economics at Citigroup.

"I'd say the consumer is doing reasonably well in an environment in which there is a risk that the consumer could be capitulating," he said.

(Read More: Why Italy Could Be the Next 'Bad Boy of Europe')

Friday is the fifth anniversary of Bear Stearns agreement to be bought out by JP Morgan.