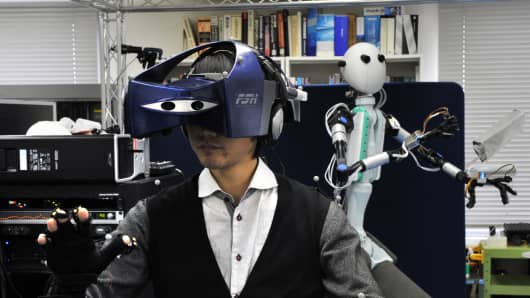 A Russian multimillionaire is targeting the business community to raise money to fund a project that aims to make immortality a reality by 2045.

It may sound like something straight out of a science fiction novel, but 32-year-old Dmitry Itskov is seeking investors to fund research for technology that will make eternal life possible by transferring human consciousness in an artificial form to avatars (robotic bodies).

"It's the next space race," Itskov said to a handful of journalists at a question-and-answer meeting Friday.

Itskov is the founder of Initiative 2045, a nonprofit organization focused on creating an international research center where scientists will research and develop the technologies to make eternal life possible.

Last year, Itskov wrote a public letter to individuals on Forbes billionaires list asking them to invest in his project. Though he received no public responses, he accomplished his goal of getting word out about the project, and he said he's continually in talks with wealthy individuals about it.

"The goal was to get the public's attention," Itskov said. "I do communicate with some of the richest people in the world, but I can't share who they are."

This summer, Itskov will make a pitch to the those individuals, as well as to the entire business community, to invest in his project and in research and development that furthers his cause.

Itskov's organization is hosting the second annual Global Future 2045 World Congress, where leading scientists, technologists and entrepreneurs gather to discuss and demonstrate technologies that are paving the way for life expansion.

Speakers at the event include Ray Kurzweil, director of engineering at Google, and Peter H. Diamandis, the founder of the X Prize Project and co-founder of Planetary Resources, among other scientists and business people.

Itskov said that he will try and convince the business community that investing in immortality is a profitable business opportunity.

Businesses will be needed to manufacture the robotic bodies that will serve as the avatars, build brain-computer interfaces (systems that allow the human brain to control the robot), and make tele-presence robotic systems (networks used to transfer a human's conscientiousness to a different avatar in another location), he said.

Itskov said that though he recognizes some may be hesitant, even reluctant, to consider a future where humans upload their consciousness to a robot, an evolutionary change is necessary if humans are to survive, and the species needs to be thinking of a long-term solution for its existence.

"Not everyone understands the motive of the project. ... I know we could really change things just by changing the way we think," he said. "I have no doubts, not even a small doubt that this is possible."