Cyprus Can't Put 'Genie Back in the Bottle': O'Neill 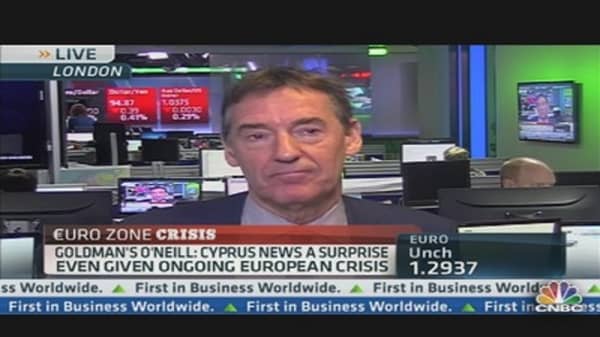 The news that the euro zone wants bank depositors in Cyprus to contribute towards a bailout is surprising even given the ongoing European debt crisis, Jim O'Neill, chairman of Goldman Sachs Asset Management, told CNBC on Monday.

"I'm still trying to get my head around [it]," O'Neill said in a "Squawk Box" interview. He added that Cyprus won't be able to "put the Genie back in the bottle" despite whether or not the depositor hair-cut gets approval.

"This is a biggie, in my opinion," O'Neill said. "I think my biggest concern with this is not whether or not this ultimately gets done, not that the idea that Cyprus would come up with something like this, but that the EU (European Union) would back it and go along these things."

Since the news over the weekend, there are media reports that Cyprus will put forward a new proposal on Monday under which a tax-free threshold or a lower tax rate for smaller depositors could be introduced. The move would be aimed at easing the pain of the bailout agreement, which would impose an unprecedented tax on savers with more than 100,000 euros in return for financial aid.

O'Neill said this idea is another move that erodes trust and the economic rationale for the European Union. "If they keep doing things like all of this kind of protective measures to keep the show on the road," he continued, "at the end of the day, people who are wanting a hope and jobs and some exciting future, they're not going to stand for it."