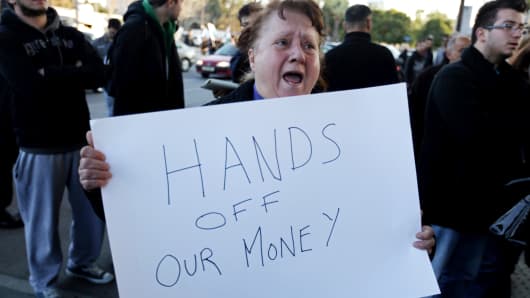 Patrick Baz | AFP | Getty Images
A Cypriot woman shouts slogans as she holds a placard during a protest against an EU bailout deal outside the parliament in Nicosia on March 19, 2013.

After Cyprus's parliament overwhelmingly rejected a tax on bank deposits as a condition of an international bailout on Tuesday, Germany's finance minister warned that the situation in Cyprus had become more serious but said the aid offer still stands.

Thirty-six members of Cyprus's 56-seat parliament voted against the measure, while 19 abstained. Parliament will resume their deliberations on Thursday.

"This is not the end of the process, but instead kicks off a further round of negotiation with Moscow and Berlin," JPMorgan economist Alex White wrote in a research note. "The Cypriot authorities wanted to conduct the vote so that they could reaffirm the extent of their difficulties to the Europeans."

The bank-deposit levy was a precondition for receiving a 10-billion euro bailout (US $13 billion). The vote effectively scuttled a loan deal the country negotiated with European and international creditors to stave off default and a looming meltdown in its financial sector.

Wolfgang Schaeuble, Germany's finance minister, said he regretted the Cyprus parliament's decision to reject the bank-deposit levy, warning that the country must act quickly to stave off insolvency. He said in a statement that the Eurogroup offer to provide aid to the island nation still stands.

The European Central Bank, meanwhile, reaffirmed its commitment to "provide liquidity as needed within the existing rules," it said in a statement.

Meanwhile a government source told CNBC that the country's finance minister Michael Sarris had tendered his resignation. The source said his resignation had not been accepted by Cyprus's president.

Politicians in Cyprus had some harsh words for international lenders.

"At this point in time, we are saying that if you think that by doing this you are fixing things, by actually destroying our economy and one of the biggest and strongest financial sectors we had on this island, then we have to say 'no'," Efi Xanthou, international relations secretary of the Cyprus Green Party told CNBC.

"We do not want to have this island in the throttle of these organizations for the next ten to fifteen years," Xanthou, who also sits on the parliamentary finance committee, said in the Cypriot capital of Nicosia on Tuesday.

Efi Xanthou said that whatever decision was made, as soon as the banks opened, there would be a "stampede" of investors rushing to withdraw their money. "No depositor, no matter how big or small their accounts, will feel safe," Xanthou added.

Athina Kyriakidou, a member of the parliament and a coalition partner to the ruling Democratic Rally party, told CNBC that she would be proposing an amendment to the levy in an effort to avert Europe's effort to "destroy Cyprus financially."

Breaking with previous practice that depositors' savings were inviolable, euro-zone finance ministers announced over the weekend a one-off tax on Cypriot bank accounts as part of a bailout by the European Union.

The measure infuriated ordinary Cypriots, who staged noisy demonstrations in the capital, Nicosia.

Tuesday's vote, originally planned for Sunday, has been postponed twice already in an effort to build consensus in a fractious parliament.

The initial proposal led to a selloff in the euro and global stock markets. Ordinary Cypriots say they are being forced to pay the price of the country's banking crisis.

European leaders have said they are open to reworking the deposit levy as long as Cyprus came up with the money.

"The rates could be different and could protect deposits under 100,000 euros, we are waiting for that and we are ready for that," French Finance Minister Pierre Moscovici told CNBC on Tuesday.

"There was a huge problem in Cyprus, nobody can deny that — with a banking sector which was absolutely enormous, with some advantages which were huge too and a lack of transparency — we had to address that, that's what we're doing,"

While Brussels has emphasized that the measure is a one-off for a country that accounts for just 0.2 percent of European output, fears have grown that savers in larger European countries become nervous and start withdrawing funds.

"If you're a small depositor in Cyprus you'll tell yourself that it would have been better to keep your money under the carpet than in a bank," said a French bank executive who declined to be named.

"And if you're a Greek, a Spaniard or an Italian, well, you'll tell yourself that you might be next," the executive said.