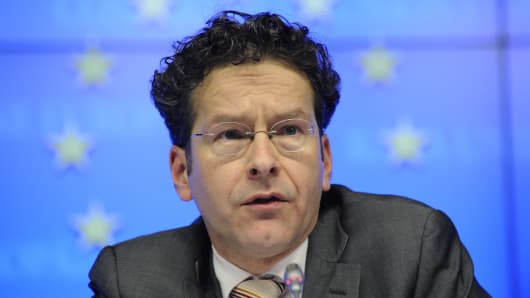 The euro, stocks and other risk assets took a roller coaster ride after a European official's comments sparked fear that the new normal in Europe will now be that regulators look to a bank's own customers to help with any bank bailout.

The S&P 500 was rallying within a half point of its all-time closing high early Monday on the Cyprus bailout deal, but comments from Dutch Finance Minister Jeroen Dijsselbloem sapped the market's gains and sent the euro and bank stocks skidding. Dijsselbloem was quoted as saying that future bank restructurings could seek funds from uninsured depositors, among other measures, suggesting to already nervous investors that any European institution could grab depositor funds.

"If the bank can't do it, then we'll talk to the shareholders and bondholders, we'll ask them to contribute in recapitalizing the bank, and if necessary the uninsured deposit holders," Dijsselbloem was quoted as saying in the Financial Times and on Reuters.

"I would read it as a broader message. No bailouts without some sort of bail ins," said Vassili Serebriakov, currency strategist at BNP Paribas. "I think he meant what he said. I think there's a general pressure for any type of bailout to be accompanied by private sector bail ins. I know we were told Cyprus was a special case." 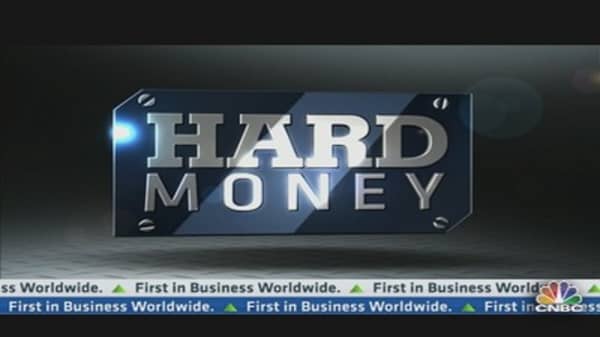 Traders said the headline that scared markets most came from a Reuters story that quoted Dijsselbloem describing Cyprus as a possible template for further bank restructurings. Dijsselbloem later denied that he called it a template, reiterating that Cyprus is a separate case, but he did not retract the other comments. The markets steadied, and stocks erased some losses.

European officials have stressed that bank bailouts won't be solely supported by sovereigns and that investors will be part of any plan. But the Cyprus deal, described as a once off, also resulted in uninsured depositors taking losses.

"He's the new guy on the job," said Boris Schlossberg of BK Asset Management. "I think sometimes they try to be too honest. They have to learn to be more political and disciplined ... but all of this stuff is a sideshow. A much bigger problem is that the euro zone is not growing at all. If they can't get better growth, all of this will come back to haunt them."

Traders said Dijsselbloem's comment made the market fearful that the EU lean on deposit holders ahead of using its own bailout mechanism as a restructuring measure. Win Thin, senior currency strategist at Brown Brothers Harriman, said in theory, there could now be runs on any bank if there were concerns about solvency. "Nobody is safe," he said.

"The uncertainty about the framework for bank resolution remains in place. The events of the last week, and today's comments further illustrate that. We can see that funding costs for banks are rising, and this is likely to be a cost banks will have to live with," he said in an email.

"I don't expect a major risk off move, but uncertainty around banks is negative for financial conditions and hence for growth. It is unhelpful in an already very weak environment for Euro zone growth. It enforces my conviction that the euro should be shorted for a gradual trending move lower."

Art Cashin, director of floor operations at UBS, said traders had been dubious about the Cyprus deal, yet the world's markets had initially rallied. "Everybody in every bank in every European country is going to ask how they are protected, and the answer is not at all," he said.

Cashin discussed one theory that Cyprus had in effect already exited the euro because its banks can no longer act normally or attract deposit. Instead, depositors are prisoners, especially those with more than 100,000 euros who will be subject to losses and will not be able to freely move their funds.

Officials had said they would need strict controls on money transfers in and out of the economy for a period of time, and that basically cuts the country off from the euro zone's financial system. Under the deal, there is 10 billion euros in financing for the government, and Cyprus Popular Bank is shutdown. That imposes steep losses on depositors of 100,000 euros or more. Bank of Cyprus will also be downsized, and big depositors there will also be hit. But small depositors and depositors at other banks will not take losses.

The size of the hit to large depositors may not be known for weeks. The drama began a week ago, when an initial bailout scheme included losses for all depositors, including those with insured deposits.

Stocks and the euro had rallied starting in Asia on word of a Cyprus bailout deal, but once Dijsselbloem's comments circulated, the gains were reversed. The euro went from 1.30 to 1.28. Treasury yields were moving higher but reversed course and the 10-year yield was at 1.90 from a high of 1.97 percent earlier in the day. After Dijsselbloem's latest comment, the yield inched back to 1.91 percent.

There was also a rumor that Italy's sovereign debt would be downgraded. Yields on Italian bonds rose and stocks sold off, but traders were skeptical of the rumors.

European bank stocks tumbled, with Deutsche Bank down more than 4 percent and others down more. U.S. bank stocks, higher early in the day, also saw losses, with JPMorgan, Citigroup and Bank of America all trading lower.