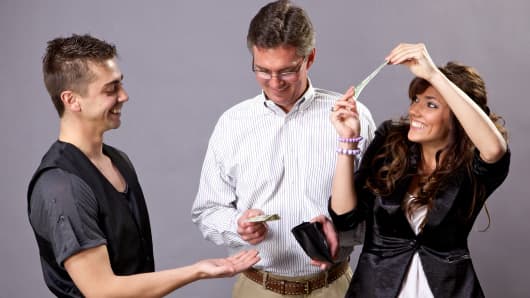 If Junior has his way, there's a good chance he's planning to be on your dime until his mid-20s, while simultaneously believing his financial future is brighter than yours, new research shows.

About 29 percent of those surveyed expect to be 25 years or older before they are financially independent without their parents' help, according to a survey from AllState and Junior Achievement USA.

That's up from 27 percent last year, and a large increase from the 16 percent who felt the same way just two years ago.

Rob Callender, director of insights with Tru, a youth research firm, attributed this planned reliance on parents on the high jobless rate among young people. That figure stands at 25.1 percent for teens aged 16 to 19, according to government data.

As many middle-aged workers have taken jobs they're overqualified for, they've displaced younger people on the totem pole, Callender said. "It's like a reverse domino effect where it's displacing young people, who may have the education but not the experience," he added.

Ironically, more teens are more optimistic about their future— despite believing they will rely on their parents into their 20s and possibly beyond, according to several data points.

While teens expect to rely on their parents more, teens also think they will be financially better off, or as well off as their parents with nearly 65 percent expressing this opinion, the AllState and Junior Achievement USA survey found. That's up from up from 56 percent last year.

Teens were even more optimistic in Tru's survey, with 90 percent believing they'll be at least as well off as their parents.

"Even in the middle of the recession, they were optimistic," said Barbara E. Ray, who co-authored the book, "Not Quite Adults: Why 20-Somethings Are Choosing a Slower Path to Adulthood, and Why It's Good for Everyone."

Ray added, "They know the trends, they know they're part of a larger trend, but they think it's going to be okay for them. It's kind of classic American optimism but maybe a little unrealistic."

Unemployment data overall paints a stark picture for young adults as they near the beginning of their careers. Although the overall unemployment rate edged down to 7.7 percent in February, the jobless rate for those aged 20 to 24 years old stands at 13.1 percent.

Faced with high unemployment, many young adults not surprisingly have set up camp at their parents' homes. This "boomerang" set, which account for nearly three out of 10 young adults, have caused the percent of those returning to their family homes to spike to the highest level since the 1950s, according to a Pew Research Center report from 2012.

Author Ray said such an arrangement can help those just starting out build more secure futures.

"You can get your ducks in a row basically because you don't have to make decision based solely on money," Ray said. "You can go get that advanced degree maybe or not have to take jobs that might be the best job to start you on a strong trajectory."

Despite their boomerang projection, Ray described the twenty-something cohort as "very optimistic."

The increasing plan among teens to rely on their parents puts added pressure on the so-called "sandwich generation" — a group stuck supporting both their own parents and their children at a time when they are trying to prepare financially for their own retirement.

(Read More: How to Retire in These Five Expensive Cities)

According to a January survey from Pew Research Center, about 15 percent of middle-aged adults reported providing financial support to both an aging parent and a child, as Generation X replaces the baby boomers as the group most likely to feel the squeeze.

The AllState survey also showed a lack of communication between adults and their kids about paying for college at a time when student debt has hit the record $1 trillion mark as measured by the Consumer Financial Protection Bureau. In fact, nearly three out of 10 teens said they had not talked with their parents about saving for higher education.

But, hey, at least mom and dad will be there to contribute financially later. (Or at least that's what the teens are planning.)