Speedy Domino's Is Slowing Things Down 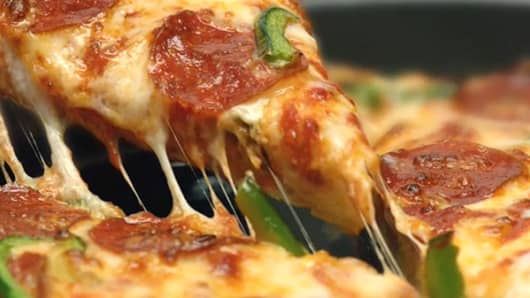 Domino's Pizza, once known for its "30 minutes or less" delivery, is slowing things down.

The company this week launched a new advertising campaign touting its Homemade Pan Pizza, which "takes a bit longer to make" and features "fresh, never-frozen dough."

"Domino's used to be all about speed," says franchisee Robert Gavitt of Dallas in the new 30-second spot. "Not anymore."

That's saying a lot from a company that has held a World's Fastest Pizza Maker competition since 1983.

Domino's Pizza spokesperson Chris Brandon said the Handmade Pan Pizza, which was introduced last fall, is the company's biggest new product since 2010. A two–topping pan pizza is available for $7.99. "When it comes to the pan pizza, it's a little slower," he said, adding that it takes "a little more time to make sure it's done correctly."

The ad was created by Domino's agency CP&B.

(More From NBC: Latest Tech Multimillionaire Is Still in School)

Philip Schlitz, director of business development and client strategy at TBA Global, said that anything Domino's Pizza can do to differentiate itself in a saturated market is a good move.

"Ultimately, from a branding perspective, I applaud them," he said.

The risk, Schlitz said, is that by focusing on fresh ingredients and handmade quality, Domino's could alienate its existing customers who want cheap pizza delivered fast.

(More From NBC: One-Man IPO: His Friends and Girlfriend Run His Life)

Domino's ended its "30 minutes or less" delivery promise in 1993 after a series of lawsuits against the company involving its delivery drivers.

"A lot of people still associate us with 30-minute delivery," Brandon said. "But that guarantee has been gone for a very long time."