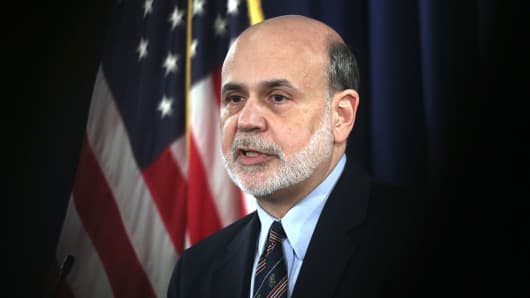 Federal Reserve policy makers worried about increased risks due to the central bank's aggressive monetary stimulus, though most view those dangers as "manageable" for now.

Minutes from the most recent Fed meeting suggest that members have grown increasingly concerned that things could get messy if it continues its asset-purchasing and money-printing policies too far into the future.

Among those concerns are instability to the financial system, a sudden rise in interest rates and inflation.

"In particular, participants pointed to possible risks to the stability of the financial system, the functioning of particular financial markets, the smooth withdrawal of monetary accommodation when it eventually becomes appropriate, and the Federal Reserve's net income," the March meeting minutes state. "Their views on the practical importance of these risks varied, as did their prescriptions for mitigating them.

Despite those worries, there appeared little indication of enough votes among the 12 Open Market Committee members to curtail the current policy anytime soon.

Moreover, the March 19-20 meeting occurred before some recent data showed economic growth began to sputter heading into the spring.

"There's been so much water under the bridge since then," said John Canally, investment strategist and economist at LPL Financial. "If the FOMC (met) today, you might see a shift toward the more dovish side. We haven't changed our view that you'll continue to see these purchases."

Market reaction consequently was fairly muted despite the seeming discontent among Fed board members, with the stock market continuing its dizzying 2013 rally. Bond yields actually fell amid a tame safe-haven bid, with the benchmark 10-year note rate at 1.78 percent.

The release of the minutes comes as Wall Street tries to anticipate when the Fed will begin scaling back its asset-buying program, known as quantitative easing.

Under the latest version of QE, the central bank is buying $85 billion a month in Treasurys and mortgage-backed securities, while critics warn of potential asset bubbles and inflation problems.

This month's minutes were released earlier than anticipated due to an error at the Fed in which the minutes were emailed inadvertently.

The comments as reported in the minutes reflect some of the strongest misgivings yet about Fed policy.

Members indicated a general tone that the moves have been necessary to stabilize the economy following the financial crisis that began in 2008.

The Fed aggressively drove down interest rates to the point where mortgage borrowing hit historic lows. At the same time, the stock market has soared, sending both the Dow Jones Industrial Average and the S&P 500 have hit record highs.

The Fed has tied its rate policy to a 6.5 percent unemployment rate and 2.5 percent inflation level, neither of which appears attainable anytime soon, particularly considering the anemic 88,000 job gain in March.

But some also said that the costs are escalating the longer the program continues.

"A number of participants remained concerned about the potential for financial stability risks to build," the minutes said.

The discussions also provided a clearer path for how the Fed intends to unwind its $3.2 trillion balance sheet, though an exit from the zero interest rate policy remains less clear.

At least as far as the $1.1 trillion mortgage-backed securities portion is concerned, the Fed is unlikely to sell those back into the marketplace, opting instead to hold that debt to duration. Members felt that would minimize marketplace disruptions.

"A few participants noted that curtailing the purchase program was the most direct way to mitigate the costs and risks," the minutes said.

That reflected a growing sentiment that the best way to manage policy risks was to stop.

"A few participants noted that they already viewed the costs as likely outweighing the benefits and so would like to bring the program to a close relatively soon," the minutes said. "A few others saw the risks as increasing fairly quickly with the size of the Federal Reserve's balance sheet and judged that the pace of purchases would likely need to be reduced before long."

Nevertheless, the final vote saw only dissent, coming from Esther L. George, while the other 11 members affirmed the policy statement.