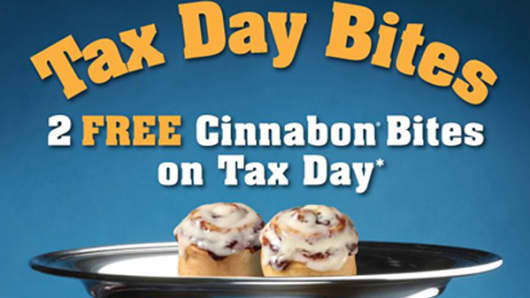 Source: Cinnabon
Cinnabon is one of many restaurants offering customers tax relief on April 15, 2013.

To capitalize on one of the year's most dreaded days, several restaurants and other retailers are offering discounts to help customers take the sting out of forking over a good chunk of their paychecks to Uncle Sam.

This trend is relatively new, Bendele said, adding that the number of deals increased this year along with the range of companies hosting promotions.

(Read More: Pitfalls and Need-to-Knows for Your Taxes)

"We've always seen great deals for tax-related software, such as H&R Block," he said. "But the new trend is now even non-tax related companies offering consumers a deal just as a break for consumers during the pain point of doing your taxes."

These promotions are hitting when many consumers have already received their tax refunds in the mail or expect them to arrive shortly. These windfalls likely won't be chump change either if recent Internal Reserve Service trends continue. So far the average tax refund is $2,934, according to government statistics, which means many Americans have a large sum of cash to burn if they want.

Since many consumers wait until the last minute to file, tax time is still on the brain for millions. Last year, about 20 percent of filers waited until the two weeks ended April 20 to submit their returns, according to IRS statistics.

Nearly 30 percent of people who expect a refund plan to do just that—spend it on everyday expenses, according to a National Retail Federation survey. In a separate survey from PriceGrabber, 56 percent of respondents expecting a refund said they plan to use the money to shop, which paints an even rosier picture for companies angling for a share of the tax refund payout.

To help ease the pain, we've rounded up some of the cleverest promotions announced so far:

Throughout April, Boston Market will be running a "We Love the I.R.S." promotion, with the acronym standing for "incredible rib specials." On tax day, the company will be offering customers a "Big Rib-bate," which reduces the price of two rib meals to $10.40.

"Tax day is top of mind for consumers this time of year, and it happened to coincide with the launch of our new St. Louis Style BBQ ribs at Boston Market," said Sara Bittorf, chief brand officer at Boston Market. "We've taken the opportunity to provide a special offer on our new ribs as a delicious distraction from it all, or even better, a reward for getting your taxes done."

Customers can also enter online to win one of 1,040 rib meals and receive a coupon for trying.

Participating locations will be offering two free "tax day bites" to customers from 6 p.m. to 8 p.m. local time. The company quips, the treats are "tastier than a refund," but with the average refund approaching three-grand, one might be a little skeptical.

Stressed about paying so much to the government and getting your forms in on time? Participating HydroMassage locations will be offering free massages from April 15 to 19 to help melt away consumers' tension.

This bagel chain offers another marketing promotion using the 1040 IRS filing form. For the discounted price of $10.40, Bruegger's is selling a bagel bundle.

Taxes particularly tiring this year? Participating McDonald's restaurants will be giving away free small coffees to help diners stay awake while recording the financial minutiae of the past year.

Through May 1, the office supplier will offer customers 25 black and white, single side copies, and up to five pounds of shredding for free.

For the third year in a row, the company is offering a tax-day related deal. This time around customers can get free value sized curly fries on Monday along with small potato cakes free of charge.

People can also enter online once a day for a chance to score one of 10 $500 tax relief prizes.

The fast-food chain is cutting drink prices in half on April 15. If only your tax rate would get as much of a haircut as well.