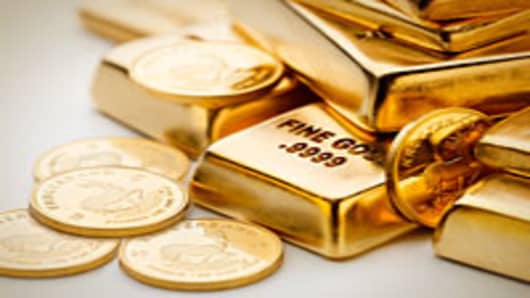 Gold settled close to $1,500 per ounce on Friday, a drop of more than 20 percent from its record 2011 highs, putting it in bear market territory for the first time after 12 years of gains.

An unexpected contraction in U.S. retail sales, which hurt stocks and supported the dollar on Friday, added to pressures building in the course of the week from several factors, including a draft plan for Cyprus to sell bullion and outflows from exchange-traded gold funds.

"The scale of the decline has been absolutely breathtaking. We tried to rally and that just didn't get anywhere... there hasn't been any downside support, it's like a knife through butter," Societe Generale analyst Robin Bhar said.

Precious metals sold off across the board with silver the biggest faller, down 5.1 percent. Other commodities also came under pressure, with Brent crude oil hitting an eight-month low.

A European Commission assessment of what Cyprus needs to do as part of its European Union/International Monetary Fund bailout showed earlier this week it is set to sell its excess gold reserves to raise around 400 million euros ($525 million).

While Cyprus' gold sale in itself is small, heavily indebted euro zone nations such as Italy and Portugal could find themselves under increasing pressure to put their bullion reserves to work as a result of its plan.

"If Cyprus can break the gold market, then (there are) many reasons to be worried, with Slovenia, Hungary, Portugal, Spain and Italy in line," Milko Markov, an investment analyst at S.K. Hart Management, said. "It is a make-or-break moment for gold ... if the market can't handle the reallocation and Cyprus, then there is really a need for a bear market."

Gold's losses accelerated sharply when it fell through key support at $1,521 an ounce, its December 2011 low. That formed the base of the broad sideways trend channel it has held within since its drop from record highs in September 2011.

A fall below this key area of support could signal further losses are on the way, according to analysts who study past price patterns for clues on the future direction of trade.

Commerzbank said in a weekly technicals report that a break through this level was "medium term bearish" and could lead to the 200-week moving average at $1,434.15 being eyed.

Wary investors continued to cut exposure to gold, with total holdings at the world's major bullion gold-backed exchange-traded-funds (ETFs) falling to their lowest since early 2012.

Holdings of the largest fund, New York's SPDR Gold Trust fell a further 2.1 tonnes, or 67,710 ounces on Thursday, after a 17-tonne outflow on Wednesday.

"Investors are still cautious and you see that looking at the continued ETFs outflows," Standard Chartered analyst Daniel Smith said.

Financial market watchers are awaiting the outcome of a two-day meeting in Dublin beginning on Friday. Euro zone finance ministers there said the necessary elements are now in place to launch national procedures to endorse a 10 billion euro bailout fund loan for Cyprus.