Stocks closed sharply lower across the board Wednesday, with all key S&P sectors in the red, following a batch of weaker-than-expected earnings and as commodities resumed their selloff amid ongoing worries over global growth.

The Dow logged its third-straight day of triple-digit moves. All three major averages suffered their sharpest one-day drops this year on Monday, before recovering most of those losses on Tuesday. With the session's declines, stocks are on pace for their biggest weekly losses of 2013.

"Given the weakened technical picture, the market didn't need a significant catalyst for a sharp selloff," wrote Elliot Spar, market strategist at Stifel NIcolaus. "However, just too many things going wrong in short period of time, brings out sellers and selling begets more selling."

(Read More: VIX Is Getting Ready to Take Market on a Ride)

All key S&P sectors closed firmly in the red, led by techs and energy. 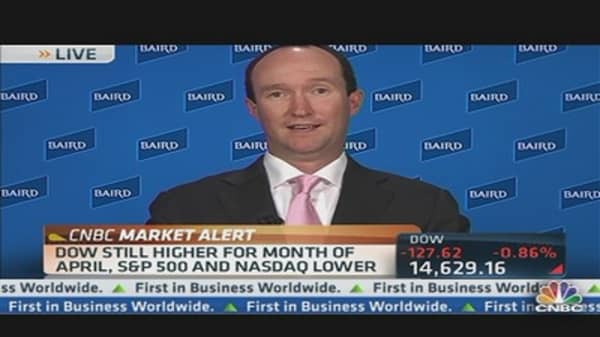 Apple tumbled sharply, briefly breaking below $400 a share for the first time since December 2011, after DigiTimes reported that iPad mini shipments will fall 20 to 30 percent quarter-over-quarter to 10 to 12 million units in the second quarter.

Among earnings, Bank of America tumbled nearly 5 percent after the financial giant posted results that that fell short of expectations. In addition, Bank of New York Mellon also declined after the bank missed earnings expectations, while revenue was mostly in line.

Meanwhile, Mattel rallied to lead the S&P 500 gainers after the toymaker edged past expectations. (Get Full Earnings Coverage Here)

American Express, Ebay and Sandisk are among notable companies scheduled to post earnings after the closing bell.

Oil prices tumbled below $98 a barrel as rising U.S. fuel supplies added to overall concern about global oil demand. And gold continued to trade lower after tumbling to its lowest since January 2011 on Tuesday. The precious metal is down about 18 percent so far this year after 12 years of gains. 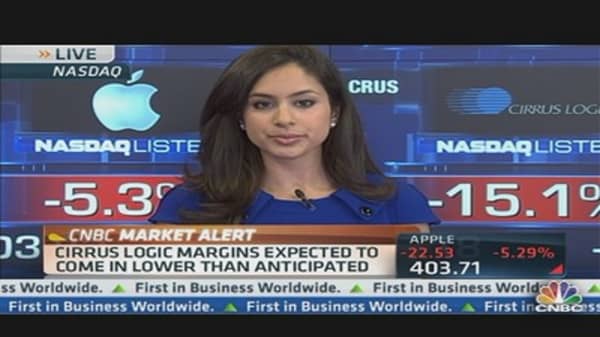 Meanwhile, the U.S. economy logged a moderate rate of growth between late February and early April, helped by improved conditions in the construction sector and rising house prices in many parts of the country, according to the Federal Reserve's latest Beige Book, a region-by-region assessment of the economy.

Grocery store chain Fairway soared more than 30 percent in its market debut on the Nasdaq. The IPO priced above its expected $10-to-$12 range.

Meanwhile, a New York appeals judge prevented J.C. Penney from selling certain Martha Stewart Living Omnimedia goods in its stores until Thursday. The court is expected on Thursday to decide whether to extend the block as Macy's continues to appeal.

Procter & Gamble plans to increase the time it takes to pay its suppliers by up to 30 days, freeing up to $2 billion in cash, according to the Wall Street Journal.

Meanwhile, the Financial Times reported on Wednesday that a senior auditor in China had warned that local government debt is "out of control" and could spark a bigger financial crisis than the U.S. housing market crash. The report comes after disappointing growth numbers from China on Monday sparked a sell-off in commodities, which fed through to global equities.

The International Monetary Fund downgraded its outlook for U.S. growth in its latest report. The IMF now forecasts the U.S. will grow by 1.9 percent in 2013 and 4 percent in 2014.

(Read More: IMF: There Is No Silver Bullet for Debt Concerns)