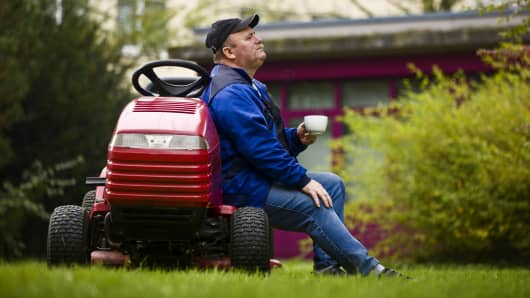 She could save money, and there's a good chance she wouldn't get caught, but Consuelo Gomez says she won't hire people who aren't authorized to work in the U.S. to work for Marty K, her cleaning and landscaping business.

Gomez says she believes that she's being undercut by competitors that hire workers who are in the U.S. without permission from the government. When potential clients tell her that her competitors can do the same work for a lot less, it makes her suspicious.

"I'll hear, `they're $2,000 cheaper than you,' and I say, `that's impossible,"' says Gomez, whose business is located in Bellevue, Wash. "I can't fathom how they do it because we would lose money."

Competing With Those Who Break the Rules

If Gomez's hunch is correct, she's dealing with a little talked about problem that a lot of small-business owners say makes survival difficult. Competing with companies that hire immigrants who aren't authorized to work in the U.S. is tough for a small business that follows the law because of the cost. Often, businesses pay ineligible workers less, and they also save on taxes.

Sixty-eight percent of business owners surveyed last month by the advocacy group Small Business Majority said too many companies gain an unfair advantage by hiring immigrants who aren't eligible to work in the U.S. In 2008, the Pew Research Hispanic Center estimated that 8.3 million people were working in the U.S. without permission. Current estimates put the total number of people in the U.S. without permission at about 11 million. The issue is in the forefront now as lawmakers propose ideas to reform the country's immigration laws.

"What small businesses want the most is a level playing field where they can compete fairly," says John Arensmeyer, CEO of Small Business Majority. "Unless we fix the immigration system, small businesses are going to continue to operate at a disadvantage with companies that aren't following the law."

"Our members have told us that while they follow the rules - committing time and resources to the hiring process - they remain frustrated with their competition when they cut corners and don't adhere to the same rules," said Kate Bonner, manager of House legislative affairs for the National Federation of Independent Business.

The number of businesses that hire ineligible workers is hard to pin down, although a study last year by the Federal Reserve Bank of Atlanta found that 1.6 percent of the 365,000 businesses it examined in Georgia had employees who weren't authorized to work in the U.S. It also showed that those employers had an advantage. Companies that employed people not legally authorized to work in the U.S. had a 23 percent chance of failing, compared with an average for all companies of 28 percent. The study confirmed what anecdotal evidence has shown: Businesses get a competitive benefit from hiring people who don't have permission to work in the U.S., says Julie Hotchkiss, one of the study's three authors.

"If you employ undocumented workers when your competitors aren't as well, that gives you the biggest boost," she says.

The study examined records of Social Security numbers at companies to find workers who weren't eligible. Hotchkiss noted that because the study used company records, it could not count the number of workers who were paid off the books -- so the total number of companies hiring unauthorized workers was likely higher.

It's widely believed that ineligible workers earn far less than people who are eligible to work in the U.S. That's not always the case. A 2002 study by researchers at University of Illinois at Chicago found that the average hourly wage earned by ineligible workers was $7, higher than the minimum wage of $5.15 at the time. To reach that average amount, many workers had to be earning below $7. But the competitive advantage that comes with hiring people not authorized to work in the U.S. is not just about salary. Companies also pay Social Security and Medicare taxes on each worker. For example, a company with a $500,000 annual payroll is required to pay more than $38,000 in federal taxes. States may collect additional payroll taxes from businesses. Soon, many small business owners will be required to provide affordable health care insurance, or pay a penalty. If a business is paying a significant number of workers off the books, it can save it thousands of dollars a year.

History shows that employers are underpaying workers who are not authorized to work in the U.S., says Raul Hinojosa-Ojeda, a University of California, Los Angeles professor who has studied the integration of immigrants into the U.S. population. He wrote a 2010 study about the impact of the Immigration Reform and Control Act of 1986, which gave permanent resident status to 3 million people who were not authorized to be in the U.S. Pay for workers in that group rose sharply when their status changed, Hinojosa-Ojeda says.

"All of a sudden, boom, wages pop up about 18 percent and in some states, even higher, and among women, higher because they were getting even lower wages," he says. "It's the difference between being below the poverty line and being above it in many cases."

But paying higher wages to workers who became permanent residents didn't hurt many businesses, Hinojosa-Ojeda says. Most adjusted, but some of those that were dependent on paying below-minimum wages failed.

"In Los Angeles we know that 10 percent of the garment industry shut down and most of it moved to Mexico — the only way they could survive paying sweatshop wages is in a foreign country," he says.

A bipartisan Senate bill revealed Tuesday could chip away at the issue. But if enacted, some measures would take time that many small business owners don't have to spare. For instance, the bill would put the 11 million immigrants in the country illegally on a 13-year path to U.S. citizenship and would begin only after steps have been taken to secure the border, according to an outline of the measure. Only about half of new businesses survive for five years or more, and one-third survive 10 years or more, according the Small Business Administration.

Another proposal in the Senate bill, called the "W" visa would admit 20,000 low-skilled foreign workers starting in 2015 and could gradually grow up to a cap of 200,000 after five years. The number of visas would fluctuate depending on factors including unemployment rates, job openings and employer demand. The existing H-2B visa program for low-wage nonagricultural workers is capped at 66,000 per year and applies only to seasonal or temporary jobs. Business groups that support the W visa idea say that the number of workers it's targeting is too low.

"That is nothing compared to what we need," says Eric Stafford, senior director of government affairs for the Kansas Chamber of Commerce. "There's a shortage of workers in this country." Some businesses consider using ineligible workers not so much because they want to save money, but because it's hard to find people willing to do jobs that are unattractive, like being janitors or doing other low-skilled work such as harvesting crops or cleaning tables in restaurants.

It's hard to say whether the difficulty finding workers or plain old greed drives business owners to break the law. If they get caught, there are hefty penalties. Companies that knowingly employ people not authorized to work in the U.S. face federal fines of $375 to $16,000 per worker. But studies show that many companies decide it's worth the risk because they save money. Also, the number of convictions of employers who violate the law is relatively low when compared with other immigration enforcement actions even though the government is making a bigger effort in this area. U.S. Immigration and Customs Enforcement increased audits of worker eligibility to 3,000 in 2012 from 250 in fiscal year 2007. In the fiscal year that ended Sept. 30, 2012, the government arrested 240 employers for knowingly hiring unauthorized workers, and 280 employees were arrested.

The government has removed far greater numbers of people from the U.S. who don't have permission to be in the country and also have criminal records, are threats to national security, are repeat violators of immigration law or are court fugitives. According to ICE, it removed nearly 400,000 people in fiscal 2011. About a month before the end of fiscal 2012 it had removed more than 366,000 people. In 2007, it removed roughly 291,000 people.

For her part, Gomez, the cleaning and landscaping service owner, says she won't succumb to the pressure to hire workers who aren't supposed to work in the U.S.