When Will Investors Fall Back in Love With Apple and Gold? 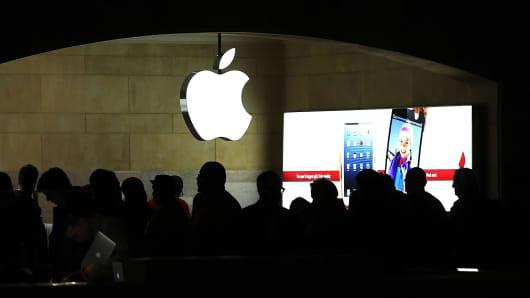 Apple and gold may have more in common than you think. For a while, neither could do any wrong – and once that illusion was shattered, both fell promptly and painfully.

"This is really just psychology," said Mark Dow, who writes at the Behavioral Macro blog. "You don't have to know anything about gold or anything about Apple to spot a bubble. It's just what happens when something becomes over-loved."

Max Wolff, chief economist and senior analyst at GreenCrest Capital, also blames psychology for Apple's decline. "You had this blind faith in Apple," Wolff said. "But now you have seen a lot of people fall out of love with the company."

As a result, "The company is now trading as a stock, as opposed to a phenomenon," Wolff told CNBC.com.

Apple has lost almost half of its value since hitting an all-time high in late September. That was coincidentally just two weeks before gold made its high for the year. Both have lost about 12 percent in the month of April so far.

On Friday, gold clawed back for a second day after the selling wave that started last week. Gold is still down nearly 7 percent for the week.

Apple continued to make new lows Friday morning, and was down about 10 percent this week. Some blame the chart. While the $420 level has served as support for Apple time and time again, on Wednesday, the stock fell clean through it and on Friday, it was trading below the $390 level.

The problem is that Apple, like gold, was over-owned, and each was bought on the faith that it would keep going higher forever. Once Apple and gold ceased to do so, there was not much keeping people in either.

In Apple, "You had a crowd of people who believed you have to own it,"Wolff said. And now, "those guys are all going away."

Gold, too, became viewed as something one simply had to own. "Consultants started telling people that it was a real asset class," Dow said. "What changed in the past week or so is the psychology. Nothing brings out sellers like lower prices — and when lower prices come fast, people get scared."

That's why Dow sees more selling to come. "I think gold has much further to go on the downside," he said. "No one's really bragging about being short gold yet, and when people do, that's when you'll know we're close to a bottom."

When it comes to Apple, the technicals are certainly no help at this point. "You want to be patient," said Auerbach Grayson Global Technical Analyst Richard Ross. "There's no need to catch a falling knife."

Ross says the stock could drop to the 200-week moving average at $372, but argues it wouldn't necessarily be a buy even there. "Apple has to show me strength," Ross said. "I'd rather be late to it" than buy in too soon.

Dan Nathan of RiskReversal.com also sees Apple going down to that level, but he would not hesitate about picking up some shares.

"Expectations are low on the earnings front, which is contrary to investors' hopes on the cash distribution expectations. If the worst-case scenario comes into play on both fronts, I think Apple flushes toward $370, possibly as low as $350," Nathan said. But that would make it "the buy of the century, or at least the year."

Wolff also thinks Apple shares are inexpensive. "When you're a phenomenon, and you go back to being a stock, the company tend to overshoot to the downside, too," Wolff said. But he doesn't see the "blind faith" coming back anytime soon. "I would be interested in buying it here and selling at about $500."

The gold story could continue to be a much more difficult one, for the reason that it is arguably impossible to place a value on the metal. "Apple does have products, and they do have earnings," Dow said. Gold has neither. Instead, "There was a speculative excess on a shaky foundation. And people came to the realization that the foundation was wrong."

Perhaps people just relied on both gold and Apple too much.

For Mark Dow, the ultimate lesson here is a dark one that has been repeated over and over throughout history.