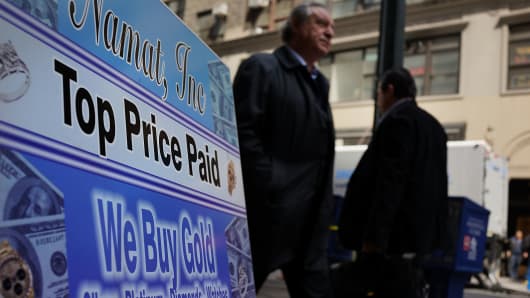 Hedge funds and other big speculators plowed new money into gold even after the precious metal posted a record loss in dollar terms this week, according to trading data on Friday that also showed inflows for many other commodities.

The net long money held by money managers across 22 U.S.-traded commodities rose nearly $950 million, or 6 percent, to $56.5 billion in the week ended April 16, according to Reuters calculations of data released by the Commodity Futures Trading Commission (CFTC).

The data surprised traders and analysts who had been expecting a huge outflow of money from gold and many other commodities this week after prices tumbled across markets on April 15, triggered by global economic worries.

(Read More: All That Glitters... Why Gold Is So Hard to Value)

"I think most people would be stunned looking at these numbers, particularly for gold, where there are still so many long even as the market sank like a stone," said Adam Sarhan, founder of Sarhan Capital in New York.

The net long position in gold futures on New York's COMEX held by money managers, including hedge funds, rose by 5,495 contracts to 61,579, the CFTC Commitment of Traders data showed.

Open interest in gold, a measure of market liquidity, rose by a staggering 24 percent.

The spot price of gold settled at just above $1,400 an ounce on Friday, down more than 5 percent on the week.

On Monday, or April 15, it fell to below $1,340, losing over 8 percent or more than $125 - its biggest loss in a day in dollar terms. It saw some support later in the week as consumers attracted to the new lower price snapped up gold bars, coins, nuggets and jewelry.

(Read More: Get Ready to Play the Coming Deflation Trade)

"Gold is rebounding off its low on a pickup in physical demand and short-covering," said David Meger, director of metals trading at Vision Financial Markets.

Despite the rebound, analysts say gold may fall further in the near term as money continues to flow out of exchange-traded funds (ETFs) of the precious metal.

Analysts said Federal Reserve policymakers could also suggest reductions in monetary stimulus in the near term, adversely impacting the price of gold.

The only markets that saw significant drops in net long money for the April 16 week were U.S. crude oil and gasoline.

(Read More: 'Armageddon' Trade Is Off as Gold Price Tumbles)

Crude oil on the New York Mercantile Exchange saw a drop of $1.2 billion in managed money net longs, according to Reuters' calculations of the CFTC data. The market saw a drop of 13,298 net long contracts while open interest rose by 2 percent.

Net longs in natural gas rose for a ninth straight week to set a new record. The value of the net longs on the InterContinentalExchange rose by around $651 million or 16,411 contracts. Open interest rose by 4 percent.