The Government’s Mortgage Fix Is Failing 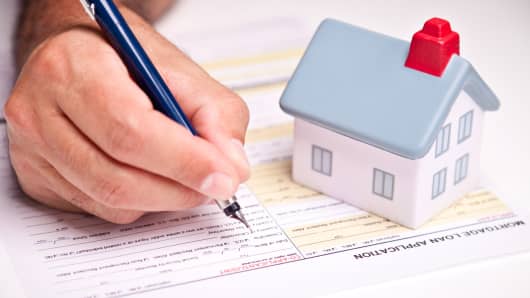 The U.S. Treasury's mortgage bailout is failing at an "alarming rate," according to a government watchdog, but architects of the four-year-old plan say that it is no worse than they expected.

A new report from Special Inspector General for the Troubled Asset Relief Program points to disturbing numbers, but offers no reason for the high rates.

Treasury's data shows that the longer a homeowner remains in HAMP, the more likely he or she is to redefault out of the program. As of March 31, 2013, the oldest HAMP permanent modifications, from the third and fourth quarter of 2009, are redefaulting at a rate of 46.1 percent and 39.1 percent. HAMP permanent modifications from 2010 also had high redefault rates, ranging from 28.9 percent to 37.6 percent.

The report directs Treasury to study why these modifications are failing and to come up with some kind of early warning system in order to help borrowers.

"Redefaulted HAMP modifications often inflict great harm on already struggling homeowners when any amounts previously modified suddenly come due," according to the report.

One of the architects of HAMP, Michael Barr, former Assistant Secretary for Financial Institutions at the U.S. Treasury, is not surprised at the numbers.

"The redefault rates are still below current industry averages, and below the conservative case we used in program design, which was the then-existing rate of 50 percent," said Barr.

Troubles with HAMP are not new. Initially it did not offer principal reduction on loan modifications, and so far, under a revised HAMP, just 82,813 borrowers received any principal reduction. Banks doing their own loan modifications have wiped away far more mortgage principal, a strategy that has proven far better results. The nation's five largest banks were required to write down some principal under the National Mortgage Servicing Settlement signed in early 2012, after the so-called "robo-signing" foreclosure paperwork scandal.

The Treasury need not look far for HAMP's shortfalls.

Back in May of 2012, bank representatives complained that the back end debt-to-income ratios (DTI), (which include all debts upon which a borrower pays) for HAMP modifications were far too high. That is, borrowers were paying far too much of their incomes on debt, and the numbers were only rising.

At the time, mortgage analyst Mark Hanson said, "A 64.3 percent DTI is so far out of scope with the pre-bubble years safe-and-sound 36 percent total DTI — and even typical bubble-years full-doc DTI's of 50 percent — it is absolutely irresponsible. Servicers are pushing the envelope with respect to getting people to qualify."

Today Hanson is the least surprised of anyone at the failure of HAMP modifications. "Because if you look at them structurally -- sky-high DTI, LTV [loan to value] and low credit score -- they make legacy Subprime loans look sane."

Hanson predicts that these bad modifications will come back to bite the banks and the economy.

(Read More: With Home Listings Low, Spec Building Is Back)

"People read headlines that 'foreclosures are at 2005 levels' and cheer. I say the high-risk distressed loans and foreclosures are still out there. They have just been called something different by banks and the government and kicked down the road a few years," says Hanson.

Banks have been doing more modifications on their own, with these proprietary fixes up 55 percent in the fourth quarter of 2012 from the previous year, according to a recent report from the Office of the Comptroller of the Currency. Meanwhile HAMP modifications are down 31 percent for the same period.

Given delays in the foreclosure process in several states, and the risky quality of these early HAMP modifications as well as other proprietary modifications done without principal reduction, it is safe to say foreclosures may rise for a time next year before finally falling back to normal levels in the next three to four years.

As home prices rise, more borrowers will come out from underwater on their mortgages, and that will reduce the risk of new defaults, but the pipeline of distress is still long and far from lean.