Clothing Excluded From US Manufacturing Resurgence 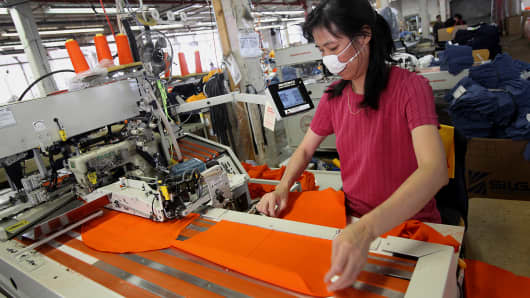 If you're angry about the collapse of a garment factory in Bangladesh last week that killed more than 400 people, look at your own closet to see where some of the blame lies.

As Western retailers try to find a way to satisfy demand for cheap clothing while maintaining safety at garment factories overseas, the word "inshoring' has begun to get bandied about as a possible solution.

American manufacturing icons like Apple and GE already have announced plans to return manufacturing jobs to the United States, but this trend toward "inshoring" is a more elusive goal in the apparel business, despite the outrage sparked by the garment factory collapse in a suburb of Dhaka, the capital of Bangladesh.

The problem? Americans love their cheap chinos and cardigans.

"If everybody wants cheap stuff, they're going to get cheap stuff, and if people can't make a living making better stuff, they'll stop doing it," said Bud Konheim, CEO of Nicole Miller, a company that makes about 80 percent of its clothes in New York City.

"Quality has been devalued a bit in the apparel industry. People want fast and cheap," said Heather Franzese, director of Good World Solutions, a subsidiary of Fair Trade USA.

"We've been totally trained to buy it cheaper. It's a challenge for the designers and the makers out there," said Erica Wolf, executive director of Save the Garment Center, a campaign aimed at preserving New York City's midtown Manhattan garment district. Pricing is "always going to be an issue, especially when it's a mass-market retailer."

Mogul donating $100M to Columbia U. to train entrepreneurs

J.C. Penney tries to woo customers back with an apology

But Franzese said that even shoppers who want to buy ethically-produced clothing find it difficult, prompting Fair Trade USA to launch a pilot program to certify apparel in 2010.

"One of the big challenges is a lack of awareness and understanding about the realities in the supply chain," Franzese said. "They don't know the right questions to ask or the right things to look for." Material used in a garment might have been woven, dyed and cut in different factories or even different countries, while items like thread and buttons, not to mention the labor to assemble the final product, come from yet other sources.

But it's also just hard to find clothes made in the United States. While a number of boutique manufacturers and designers with smaller production runs do make products here, they're few and far between.

In a report last October, the American Apparel & Footwear Association said that although domestic apparel manufacturing grew 11.1 percent in 2011, more than 97 percent is imported. In the 1960s, that number was 95 percent, according to Save the Garment Center.

"Most of those people have moved offshore, and what's moved offshore with them is the supplier and the infrastructure," he said. Decades ago, a manufacturer in New York City would be just blocks from supplies of thread, zippers, lining material and other components that go into making a garment. "Today it's a three month delivery period because nobody's here anymore," he said.

Said Franzese: "I think it is similar to electronics ... those capabilities don't exist in the United States anymore."

Sourcing talent is an equally daunting challenge, one referenced by Apple CEO Tim Cook when he addressed Apple's attempts to manufacture in the U.S.

"It's not so much about price, it's about the skills," Cook told Brian Williams in a December interview on NBC's Rock Center, in which he discussed investing $100 million to build an iMac line in the United States.

Cook and Konheim both blamed an American education system that focuses on college preparation to the detriment of vocational career training. "We've managed as a culture to discourage working with your hands and only encourage sitting behind a desk," Konheim said. 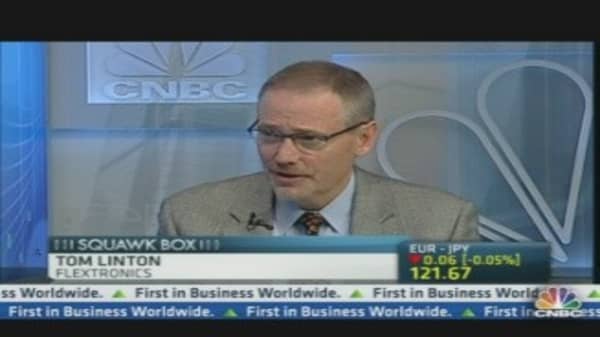 And the elephant on the factory floor is labor costs.

"It ultimately boils down to the cost of production," said Vinod Rangarajan, a retail and sourcing strategist for consulting firm Kurt Salmon. "Especially for the mass-market, large-scale production runs, it's much more economically feasible to produce overseas, given the labor rates in those countries."

A 2010 report by the Institute for Global Labour and Human Rights compared U.S. garment wages of $8.25 to $14.00 per hour with those of workers in other countries. (Bangladesh had the lowest labor rate at 21 cents an hour.)

Even taking into consideration the wage inflation of 15 percent or more that has occurred in many Asian countries over the last few years, the gap is still substantial, Rangarajan said.

Advances in robotics have helped companies in other industries save on labor costs when manufacturing in the United States. Instead of 10 or 12 workers performing a task by hand, one or two can operate sophisticated machinery that produces the same amount of output.

But in apparel, there really is no substitute for a sewer's hands, Rangarajan said. "We haven't seen very many successful automated production capabilities yet ... the construction of a garment just requires a lot of manual work."

Advocates say they see steps in the right direction. In January, Wal-Mart Stores announced that it would buy $50 billion more in American-made goods over the next decade.

Adam Reiser, co-founder of Made in USA Certified, a certification provider, said he's working with two American manufacturers — one making T-shirts, the other cargo shorts — that hope to get certified to become vendors under the initiative.

"The latent demand is there. It's about pioneering companies paving the way for others to follow," Franzese said.

But she acknowledged change will be slow. "The issue with clothing is that the purchase drivers are different," she said. Because it's not just pricing and ethics, she said: "They have to make your butt look good."