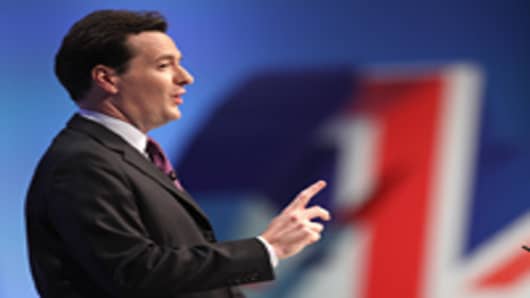 The ruling Conservative party in the U.K. took a blow on Friday after the anti-European Union U.K. Independence Party (UKIP) made major gains at local elections.

Leader of the Conservative Party David Cameron has previously described UKIP as "fruitcakes, loonies and closet racists". However, early results showed UKIP has won as many seats as the main opposition Labour party, putting pressure on the Conservatives ahead of the next general election.

(Read More: UK 'Not Much Room for Maneuver': Fitch)

Vicky Redwood from Capital Economics said UKIP's success was primarily related to immigration issues, but if the Conservatives feel threatened as they approach the general election they may have to rethink their fiscal plan for the country.

"One possibility is the Conservatives will rethink their austerity policy, however they could end up worse off as that would be an admission of failure," she said.

"Osborne's austerity measures coupled with the fact the U.K. economy is not really growing will have contributed to Labour's success over the Conservatives in opinion polls," she added.

Conservative Chairman Grant Shapps admitted his party was "failing" to communicate its policies to voters.

Richard Driver, an analyst at forex firm Caxton FX, said earlier this month: "Flat-lining growth and a lack of progress on the U.K. debt profile demands a fresh approach."

The U.K. government's austerity policies have also come in for criticism from the IMF, which warned the Chancellor last month that he needed to rethink the pace of his deficit reduction plan.

"In the U.K., where recovery is weak owing to lacklustre demand, consideration should be given to greater near-term flexibility in the fiscal adjustment path," the IMF said in its World Economic Outlook.