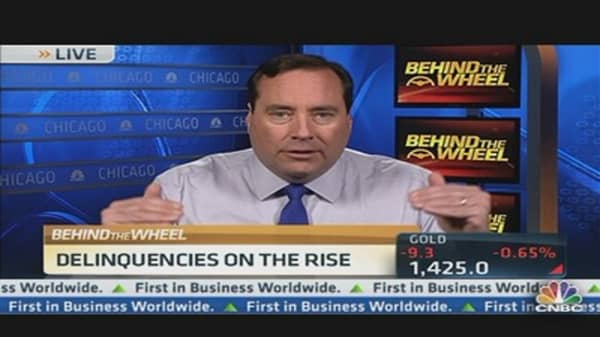 An increase in auto repossessions due to borrowers defaulting on their car loans is raising new questions about whether the auto industry is going too far selling new cars and trucks to those with subprime credit records.

According to Experian Automotive, the percentage of auto repos in the first quarter jumped 16.9 percent, and the average charge-off for bad loans jumped more than $600 to $7,401.

Combined the two figures suggest dealers and lenders are selling cars to those who are not a good credit risk, but not everyone sees it that way. 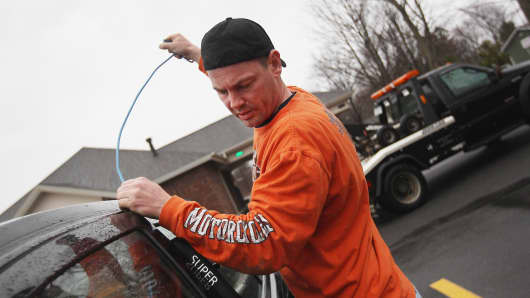 Getty Images
Recovery Agent or 'repo man' Jeff Grevelding breaks into a vehicle while repossessing it after it's owner fell behind in loan payments.

"I don't think there is need to be concerned with the industry right now. We are seeing slight increases in delinquency. However, they are still at historic lows," said Melinda Zabritski with Experian Automotive. "Despite a slight increase in delinquency, the charge-offs when they do occur are lower today than they have been in years."

Four years ago, at the depths of the recession, the repo man was busy.There were plenty of reports of auto repo facilities packed with recently bought cars and sport utility vehicles the owners stopped paying for.

Visit most repo yards today and it's a far different story. Overall, the repo rate for all auto loans is still one half of 1 percent.

Dealers are noticing a difference in the people coming into showrooms.

"People are not upside down like they used to be. Unemployment of course is getting better, especially here in the Midwest after being stagnant for a while," said Scott Adams, who owns Toyota, Chrysler, Dodge and Jeep dealerships outside of Kansas City.

"So you don't see the upside down, awful credit that you used to. These people can buy a car and they are trying to buy something that they really need."

(Read More: Bigger Is Better: SUVs and CUVs Rule the Road in China)

Adams said he's also seeing fewer people stretching too far or trying to trade up to be something that will be tough to afford. Instead, SUV buyers are increasingly opting for lower cost crossover utility vehicles.

First, as the economy expands and more people get jobs, those with riskier credit records move into new jobs that give them the means to buy a car or truck. Second, auto lenders are feeling more comfortable writing loans for those with lower credit scores. After all, the paper is backed by a car and the charge-off for bad loans is below the five-year average. In the second quarter of 2010, the average charge-off for a busted loan topped $11,000.

"About 50 percent or so of people who are buying cars are subprime, a small percentage of those will go delinquent, but this is still a very strong market." said Zabritski.

"Used vehicle values are very strong, so when some of those used vehicles do end up being repossessed the losses are not as significant with today's strong market as they would have been several years ago."