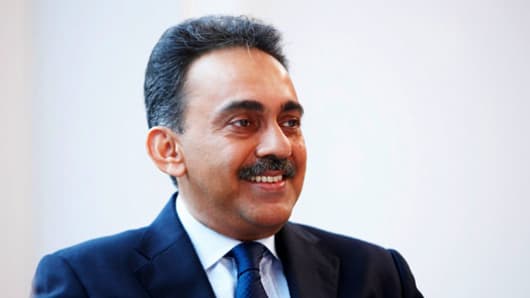 Standard Chartered remains committed to expanding its presence in Africa to tap the vast potential of the continent's high-growth economies, the firm's executive director told CNBC.

"Seven of the ten fastest growing countries in the world are in Africa. It has huge consumer potential. Last year, the African consumer spent over a trillion dollars, which is more than consumers spent in India," V Shankar, who is also CEO of Standard Chartered Europe, the Middle East, Africa and the Americas explained to CNBC's "Access: Middle East" on the sidelines of the World Economic Forum in Jordan.

Last year, the London-based bank made revenues of $1.6 billion from the continent, a figure it's looking to double in the next five years. "We are planning to add a hundred new branches, we said by 2015,and we've already added 27 last year".

Sub-Saharan markets are attracting interest from bankers around the globe, inspired by lackluster economic growth and saturation in many developed economies. Other heavyweights of the likes of JPMorgan and China's ICBC have been bolstering their presence. For Standard Chartered, new business is being discovered in both wholesale as well as consumer banking.

A recent report by the European Investment Bank (EIB) underscored the nascent state of the industry in Sub-Saharan Africa, describing banking systems as "still underdeveloped, with low and inefficient intermediation and limited competition".

Shankar is aware that political risks remain in many of the markets the bank operates in. But recent strides by the likes of Sierra Leone and Kenya are keeping him positive that Africa's time has arrived. Setbacks, as currently evident in Mali, were to be expected.

"Now here's the good story about Africa. Governance is improving and the political stability is increasing".

Dubai a 'Remarkable Story of Turnaround'

StanChart had a front-row seat to the Dubai bubble that burst spectacularly in 2009 by being one of the lenders to the now infamous Dubai World. Economic indicators have recovered since, in part due to more tourist arrivals as the Arab Spring rages in neighboring countries

"Dubai has been a remarkable story of turnaround. It's benefited from the Arab Spring, and the three levers that drive Dubai's economy are in very robust shape: travel, tourism and transportation, and logistics and trade"

"I'm optimistic for (the) following reason: a large chunk of that debt is actually owed to Abu Dhabi. One should hope that that will be renewed and refinanced, and there is also fantastic demand for Dubai debt in the bond markets"

Meanwhile, tightening sanctions on Iran, historically an important trade partner for Dubai, have hit trade and forced several banks to closely examine dealings with Iranian clients. In 2012, the U.S. government accused StanChart of violating U.S. sanctions on Iran by hiding some $250 billion in transactions. The suit was eventually settled with Standard Chartered paying out $667 million to the U.S. government.

"Look, the reality of the situation is, we got it wrong, then unequivocally apologized, we learned a lesson. It is time to move forward. We as bankers must up our game, that is the reality."

The bank stopped business with Iran in 2007, and what remained would not last for long. "To the extent that we have anything left it is very minuscule and is remnants of business done pre-2007 and it will be phased out very shortly…as and when we get repaid".

This week on "Access: Middle East": An exclusive interview V Shankar, the CEO of Standard Chartered in Europe, the Middle East, the Americas and Africa. Find out what he really thinks about banking regulations, the rise of the yuan and why the time is right to do more in Iraq.