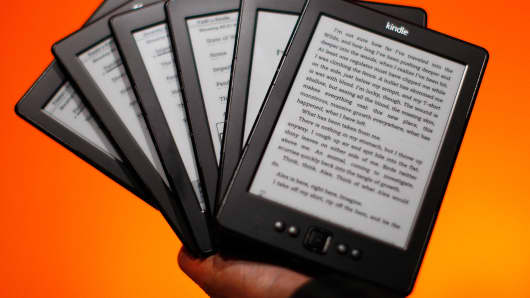 France's culture minister has attacked Amazon, the online retailer, for deliberately undercutting traditional rivals to create a "quasi-monopoly", in the latest assault by the socialist government on internet companies.

"Today, everyone has had enough of Amazon which, through dumping practices, smashes prices to penetrate markets to then raise prices again once they are in a situation of quasi-monopoly," said Aurélie Filippetti, the culture minister.

Calling Amazon a "destroyer of bookshops", she added that she was considering a ban on free postage offers and a current regime of allowable 5 per cent discounts on books.

Her attack on the US company followed a veto last month by Arnaud Montebourg, the leftwing industry minister, of a proposed acquisition by Yahoo, the web portal, of a 75 per cent stake in DailyMotion, a fast-growing French video sharing site owned by France Telecom.

In April, the digital industries minister labelled Apple "extremely brutal" for excluding a French start-up from its App Store, complaining that the US company had acted unethically.

Ms Filippetti was speaking in Bordeaux where the government announced a €9m joint plan with French publishers to support independent booksellers. "This is an unprecedented effort in favour of the book and reading because without independent bookshops there will be fewer publishers and authors, less choice for the reader and fewer social networks in towns," she said.

Her attack on Amazon came despite the establishment in France by the company of several big distribution centres. Mr Montebourg attended the opening a year ago of the most recent in Chalon-sur-Saône in eastern France, which employs 500 people.

Ms Filippetti recently backed a proposal to tax smartphones and other internet-enabled devices recommended in a government-commissioned report on how to preserve France's "exception culturelle" against the flood of mainly English-language digital content in the internet era.

Both the current government of President François Hollande and the previous centre-right administration of Nicolas Sarkozy have been quick to take up the cudgels against internet companies perceived to pose a threat to French companies and French interests.

Mr Sarkozy, who introduced a draconian regime to try to stem illegal downloads, famously said the internet "cannot be a lawless place, where people are allowed to pillage artistic works with no limits".

Under the current government, the telecoms regulator has asked the Paris public prosecutor to investigate Skype, the Microsoft-owned internet telephone service, for not registering as a telecoms operator.

Meanwhile, Mr Hollande put pressure on Google earlier this year into agreeing to pump €60m into the country's ailing newspaper industry by threatening to introduce legislation to force the search engine to share its revenues from links to French media articles.