Obama Defends US Surveillance Effort As 'Trade-Off' For Security 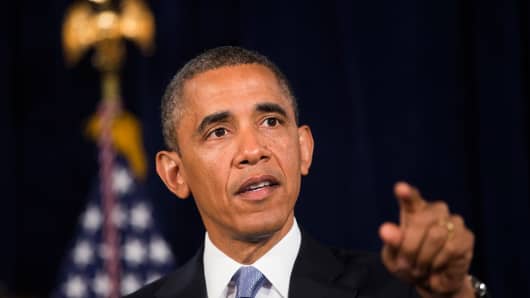 President Barack Obama on Friday staunchly defended the sweeping U.S. government surveillance of Americans' phone and internet activity, calling it a "modest encroachment" on privacy that was necessary to defend the United States from attack.

"Nobody is listening to your telephone calls. That's not what this program is about," Obama told reporters during a visit to California's Silicon Valley.

He emphasized that the secret surveillance programs were supervised by federal judges and authorized by Congress, which had been briefed on the details.

Obama's comments came after reports this week in Britain's Guardian newspaper and the Washington Post revealed that the National Security Agency and the FBI had secretly conducted surveillance of Americans' telephone and internet communications activities far beyond what had been made public.

The reports triggered a broad debate about privacy rights and the proper limits of government surveillance in the aftermath of the Sept. 11, 2001, attacks on the United States. They also sent White House officials and congressional leaders scrambling to explain why the government needs to collect information on trillions of phone calls and internet communications.

(Read More: Obama, Xi Agree to Work Together on Cybersecurity)

"In the abstract you can complain about Big Brother and how this is a potential program run amok, but when you actually look at the details, I think we've struck the right balance," Obama said, noting that a secret federal court reviews requests for surveillance and that Congress is briefed on such activity.

He acknowledged having "a healthy skepticism" about the programs before he was first elected in 2008, but that he had since come to the conclusion that such "modest encroachments on privacy" were worth it.

"You can't have 100 percent security and also then have 100 percent privacy and zero inconvenience," Obama said. "We're going to have to make some choices as a society. ... There are trade-offs involved."

U.S. law enforcement and security officials said the government was likely to open a criminal investigation into the leaking of the highly classified documents on the programs to the Post and Guardian.

The officials, who were not authorized to speak publicly, said the agencies that normally conduct such investigations, including the FBI and Justice Department, were expecting a probe into the leaks.

Obama's administration was already embroiled in other privacy controversies involving the searches of telephone records for Associated Press reporters and the phone records and emails of a Fox News reporter as part of leak investigations.

Those controversies, along with a scandal over the Internal Revenue Service's targeting of conservative groups for extra tax scrutiny and questions about the handling of last year's deadly attack on a U.S. diplomatic compound in Benghazi, Libya, have cast a cloud over Obama's second term and his pursuit of budget and immigration reform deals with Republicans. 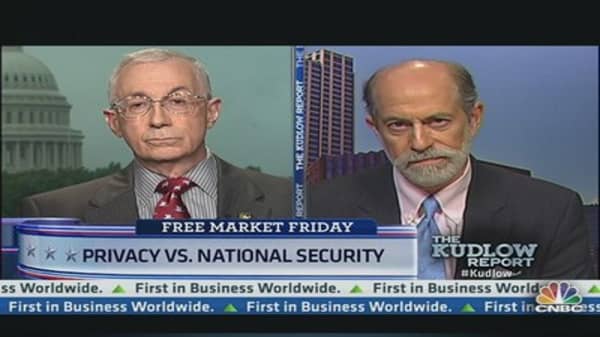 The Post reported late on Thursday that U.S. authorities had been tapping into the central servers of nine internet companies - including Google, Apple, Yahoo and Facebook - to gain access to emails, photographs and other documents and files that would allow analysts to track a person's movements and contacts.

Hours earlier, the Guardian reported that the NSA had been mining phone records from millions of customers of a subsidiary of Verizon Communications

The relationship between the government's surveillance program and the internet companies remained murky on Friday.

Some of the companies named by the Post - Google, Apple, Yahoo and Facebook - denied that the government was able to tap directly into their central servers, as the newspaper reported.

Microsoft said it did not voluntarily participate in any government data collection and only complied "with orders for requests about specific accounts or identifiers."

Facebook Chief Executive Officer Mark Zuckerberg posted a statement saying: "We have never received a blanket request or court order from any government agency asking for information or metadata in bulk, like the one Verizon reportedly received. And if we did, we would fight it aggressively."

The statements from the technology companies seemed to suggest the government had gone to the secret Foreign Intelligence Surveillance Court to obtain orders to force cooperation from some or all of the internet companies.

U.S. officials described the government's collection of trillions of pieces of "metadata" as an effort to build a giant database of communications that can be used as a research tool for investigators when they receive a tip that a foreign terrorism suspect is plotting to attack America.

Such data can be used to track suspects and their communications with others, analysts said. But if investigators want to track people more closely - such as by listening to their phone calls or reading their emails - another court warrant is required.

Obama emphasized that point in describing how his administration had instituted audits of the programs and expanded safeguards designed to ensure they did not overstep their authority.

The programs "do not involve listening to people's phone calls, do not involve reading the emails of U.S. citizens or U.S. residents, absent further action by a federal court that is entirely consistent with what we would do, for example, in a criminal investigation," he said.

The program to collect emails helped foil an Islamist militant plot to bomb the New York City subway system in 2009, U.S. government sources said. They said that was the plot cited by Representative Mike Rogers, chairman of the House of Representatives Intelligence Committee, on Thursday in defense of the surveillance effort.

Obama challenged members of Congress who did not agree with the effort to "speak up. We're happy to have that debate."

Congressional criticism has been muted, with some Republican and Democrats questioning the programs but most leaders in both parties defending them and saying Congress had been kept informed of their progress.

"This program, as imperfect as it might be, has done so much to keep America safe. We need to keep the program, so that it can move forward," Reid said in an interview with the Spanish-language network Univision that will air on Sunday.

Members of Congress are routinely briefed by the NSA on secret surveillance programs, but it is not clear how much they knew about the widespread surveillance of internet activity.

Representative Steve Israel, a New York Democrat, said there should be a review of the operations of the Foreign Intelligence Surveillance Courts that oversee and approve the programs.

"Are they working? I think we have to open that process up a little bit more," he said on MSNBC.

Representative Henry Waxman, a California Democrat, said he thought the administration had good intentions but that the program was "just too broad an overreach."

"I think there ought to be some connection to suspicion, otherwise we can say that any intrusion on all of our privacy is justified for the times that we will catch the few terrorists," Waxman told MSNBC.

Obama may have to broach the subject of surveillance during his meetings with Chinese President Xi Jinping at a California summit on Friday. U.S. concerns about alleged Chinese hacking of American secrets were expected to be high on the agenda.

The Washington Post said the surveillance program involving internet firms, code-named PRISM and established under Republican President George W. Bush in 2007, had seen "exponential growth" under Obama, a Democrat. It said the NSA increasingly relied on PRISM as a source of raw material for daily intelligence reports to the president.

Erwin Chemerinsky, a law professor at the University of California, Irvine, called the program "deeply disturbing" and beyond what should be constitutionally acceptable.

"It is a huge gathering of information by the federal government. The argument that it protects national security is unpersuasive," he said.

The surveillance disclosures have become a subject of humor on the internet. The Huffington Post, suggesting Obama's security policies had begun to mirror those of his much-criticized predecessor, Bush, greeted readers with a photoshop melding of their pictures with a headline: "George W. Obama."

On YouTube, there was a parody of Verizon's "Can you hear me now?" commercials, with Obama's voice answering in a refrain of his 2008 campaign slogan, "Yes, we can!"