Stocks accelerated their selloff in the final hour of trading to end near session lows Wednesday, after the Federal Reserve said it will maintain its bond-buying program, though Chairman Ben Bernanke hinted that the central bank plans to moderate purchases later this year.

"They don't tie themselves officially into anything but it's clearly what they're going to do," said Jim Paulsen, chief investment strategist at Wells Capital Management. "I think he's more clearly said today than at any other time that he's going to taper before the end of the year, and there's a possibility he could be done by the middle of next year."

The Dow Jones Industrial Average tumbled 206.04 points, or 1.35 percent, to end at 15,112.19, wiping out most of its gains from the last two sessions. All 30 Dow components finished in the red, dragged by Verizon and AT&T. The blue-chip index logged its seventh-straight triple-digit move.

The CBOE Volatility Index (VIX), widely considered the best gauge of fear in the market, finished above 16.

All key S&P sectors finished firmly lower, dragged by the defensive sectors such as telecoms and utilities. 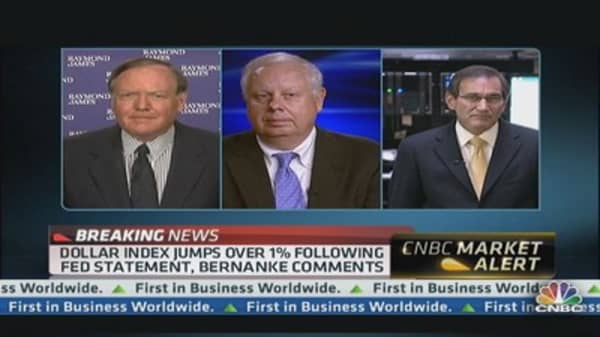 Fed policymakers said in a statement the Fed would keep buying $85 billion in bonds a month and modestly raised its expectations for GDP growth for 2014, from 2.9 to 3.4 percent to 3.0 percent to 3.5 percent. But in a press conference, Bernanke said if the economy continues to improve the asset-purchasing program could start winding down towards the end of 2013 and wrap up in 2014.

Interest rate hikes however, he said, are a separate issue and "still far in the future."

"Wall Street traders expected exactly what the Fed delivered today: slight forecast improvements while providing a crutch to continue with its aggressive monetary policy measures," said Todd Schoenberger, managing partner at LandColt Capital. "Interestingly, the language in the statement provides a mulligan on the recent 'tapering' comments. But Wall Street has already 'traded out' those statements and bulls will now focus on the comments about the likelihood of an increase in rates not occurring until 2015. Keeping rates low indicates a continued bull run in equities for the foreseeable future."

Treasury prices fell after the announcement, with the benchmark 10-year yield hitting its highest level since 2011. Gold prices briefly dipped below $1,350 an ounce for the first time in more than four weeks and the SPDR Gold Trust fell to close at its lowest level since February 2011.

Major averages have been volatile since Bernanke said last month that the Fed could begin to pare back its stimulus efforts if the U.S. economy gains momentum.

President Barack Obama added to uncertainty about Fed policy on Tuesday, when he gave a press interview in which he suggested that Bernanke would leave at the end of his term in January. Obama said Bernanke had "already stayed a lot longer than he wanted or he was supposed to."

But Bernanke refused to address questions about his future at the central bank. Fed Vice Chairman Janet Yellen is widely seen as the leading candidate to replace Bernanke, but there are other possibilities, including former Treasury Secretary Larry Summers. Yellen's views are viewed as similar to those of Bernanke. 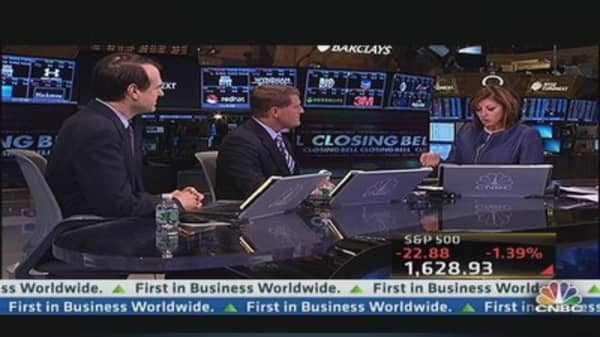 In company news, FedEx reported a bigger-than-expected quarterly profit, thanks to its ground shipment business and amid lower jet fuel prices. But the company, considered a bellwether for economic activity, issued disappointing guidance.

Adobe surged to lead the S&P 500 gainers after the software maker beat earnings expectations and said it expects the number of paid subscribers for Creative Cloud in the current quarter to top the 221,000 subscribers who signed up in the second quarter, increasing the total to 700,000.

Micron Technology, Red Hat and Jabil Circuit are expected to post earnings after the closing bell.

Men's Wearhouse declined after men's apparel retailer said it terminated CEO George Zimmer, providing no immediate reason for the ouster. In addition, the company postponed its annual shareholder meeting to renominate the existing slate of directors without Zimmer.

Following the termination, Zimmer told CNBC, "Over the past several months I have expressed my concerns to the Board about the direction the company is currently heading. Instead of fostering the kind of dialogue in the Boardroom that has in part contributed to our success, the Board has inappropriately chosen to silence my concerns through termination as an executive officer."

Meanwhile, Dish Network Corp said it would not make a new offer to buy No. 3 Sprint Nextel, and would instead focus on its tender offer for Clearwire Corp.The decision may be good news for Japan's SoftBank, which is also trying to buy Sprint.

On the economic front, interest rates on home mortgages gained for the sixth-straight week to hit their highest level in over a year, according to the Mortgage Bankers Association, pushed higher by worries that the Fed could slow its stimulus program sooner than expected.