The Chocolate Indicator: Using Hershey to Predict the Market

Life may be like a box of chocolates, but how about the stock market?

Brian Stutland of the Stutland Volatility Group believes that chocolate sales can tell us a great deal about where the market will go next.

"Your basic thing that everybody loves is chocolate," Stutland said. "If chocolate sales are falling—if you hate chocolate—you definitely hate real estate or whatever big-ticket purchases you want to make."

So to get a jump on the market's next move, Stutland zeros in on one particular company: Hershey. 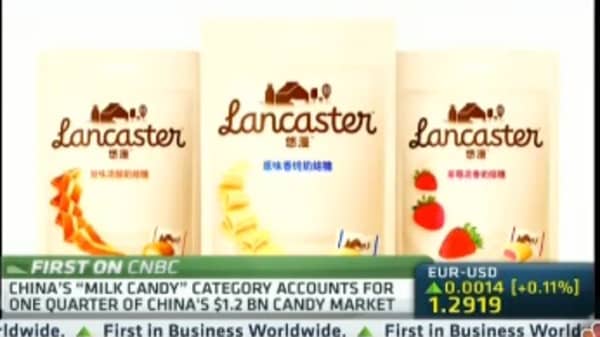 In addition to capturing chocolate sales, "Hershey usually trades at a pretty low multiple," said Stutland, who is an "Options Action" contributor. "If the multiple starts to get overextended, and investors start to take the multiple down, that is probably going to happen across the marketplace. So the market will follow the mean trend" that is first set by Hershey.

Indeed, a CNBC analysis showed that going back to 1985, Hershey's coefficient of correlation with the S&P 500's performance nine months later is an impressive 0.86 (a correlation coefficient of 1.0 shows perfect equivalence). That means that 86 percent of the time that Hershey shares have moved higher or lower on a daily basis, the S&P tracked the movement nine months later.

Note this chart, which matches up the S&P 500 with Hershey stock nine months prior:

So could there actually be something to Stutland's theory?

"I don't see that there would be any direct reason for that," said Jonathan Feeney, an analyst who covers Hershey for Janney Montgomery Scott. "It's hard to imagine that demand for chocolate has a broader correlation with things going on that will drive the marketplace."

Nonetheless, Feeney notes that a compelling case for Hershey leading the market could be made.

"Staples companies do engage in small-dollar-amount transactions that require no planning," Feeney told CNBC.com. "You would expect that if you look at top staples companies, they probably interface with a larger number of consumers than any other companies, with the possible exception of financials."

Because of this fact, looking at demand for staples to predict the market's next move has become a popular strategy.

"I've had people ask me before what's going on with the strategy and the underlying business fundamentals of food companies with respect to what's going on with the U.S. consumer," Feeney said. "And as a way of understanding consumer fundamentals, it is pretty valid. It's a lot more real-time than anything the government sends out, because they interact with a high volume of consumers on a daily basis."

Erin Lash, who covers Hershey for Morningstar, is a bit more skeptical.

"When Hershey put through a price increase of 11 percent in March of 2011, the volume didn't necessarily suffer. Why? Because the thought is that chocolate is an affordable luxury," Lash said. "Whether they're squeezing other areas of their pocketbook or not, consumers want to treat themselves in some manner."

For that reason, whether people buy more or less chocolate says nothing about whether they'll soon buy a new car or a new house, in Lash's opinion. "If you want to splurge on something, it's going to be a low-priced item, relatively speaking," Lash maintained.

In fact, the Hershey-S&P theory might call to mind other offbeat market correlations, as epitomized by the "Butter in Bangladesh" correlation. David Leinweber, who heads the Lawrence Berkeley National Laboratory Computational Research Division's Center for Innovative Financial Technology, discovered that the data series with the highest correlation to the S&P 500 over a 10-year period was butter production in Bangladesh. He uses that fact to mock the idea that strong correlations necessarily help us predict where the market will go next.

The Hershey-S&P correlation did not much impress Leinweber, who wrote to CNBC.com that it is "similar to Butter in Bangledesh theory. With enough lags and sample periods, I'd bet you could find many similar effects."

But Stutland stands by his thesis. "It's not like, 'Oh, Hershey's going up, we've got to buy the market,'" he said. "But it's something you've got to watch."

It is worth noting that Stutland happens to own shares of Hershey, which he says is "basically" the same as being long the S&P in the future.

So what does the "Chocolate Indicator" say the next nine months will bring? Actually, it predicts that the S&P will be flat. Since April 2012, Hershey shares have risen by only 3 percent.