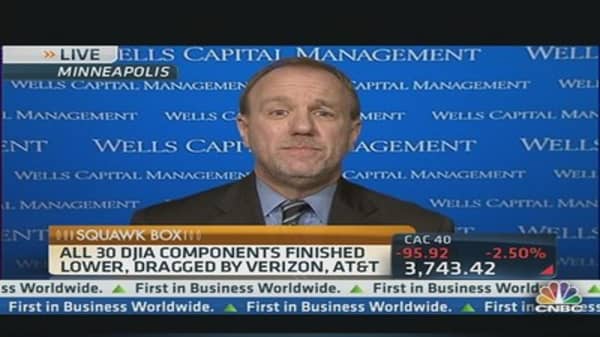 The bull market in stocks is "probably not over" but in a "pause phase" for the rest of this year, James Paulsen, chief investment strategist at Wells Capital Management, told CNBC on Thursday.

If stocks continued to trend sideways and the S&P 500 Index ended the year at 1,650, Paulsen said, that's a price-to-earnings multiple of 15 or less, which is below long-term average norm. "So there's still quite of bit of upside for the valuation of this market," he said in a "Squawk Box" interview.

"You take the rest of the year on days like yesterday to buy," he said, "to get yourself in the position of equities you want going into 2014."

Treasury yields shot up with 10-year yields hitting their highest peaks since March 2012, while 30-year yields spiked to their loftiest levels since April 2012.

"Watching the bond yields go up [25 basis points] in a single day is difficult for stocks. But if the bond market can find someplace to average in for awhile, then I think stocks can gain some footing," Paulsen said.

(Read More: After the Fed—What's the Market's Next Move?)

"But I think we're going to kind of oscillate here the rest of the year between maybe slightly below 1,600 and slightly above 1,700," he added.

Bernanke's comments were a "mark of success" of the economic recovery, Paulsen said. "When the Federal Reserve chairman has to stand up and tell the American public that they think this economy can stand on its own and we can scale back our help, I think for an equity investor that's a good thing."

He said Bernanke's comments help eliminate the notion that "the Fed overdoes it."

"We got to adjust to a huge surge in bond yields," Paulsen said. "But when we do, I think we're going to come away with this with a feeling of greater sustainability longer term and that will beget even better economic behavior."