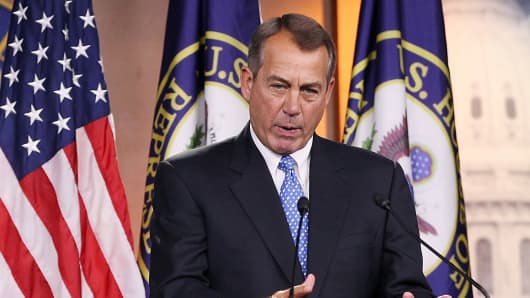 House of Representatives Speaker John Boehner urged President Barack Obama on Thursday to push Democrats in Congress to back a move to switch student loan interest rates to a market-based system before they double on July 1.

Rates on federally backed student loans are to rise to 6.8 percent from 3.4 percent unless Congress acts. Instead, lawmakers have been engaged in partisan squabbling that is expected to end in a last-minute resolution.

In an open letter to the president, Boehner attempted to align a Republican market-based approach to a similar proposal by Obama.

The bill Boehner touted, passed by the House in May, would peg interest rates at 2.5 percentage points above the 10-year Treasury note and cap rates at 8.5 percent. Rates would be recalculated every year.

Under Obama's plan, rates would also be set based on the 10-year note, plus 0.93 of a percentage point, but would be fixed for the life of the loan. His plan does not include a rate cap.

"On an issue you have made a top priority, it is astonishing that your fellow Democrats have been so openly hostile to your proposal," Boehner wrote. 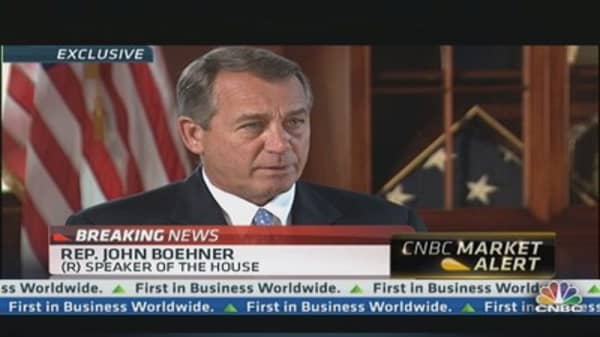 The White House has threatened to veto the Republican bill, which also faces opposition in the Senate.

Republicans have expressed frustration over what they say Democrats' unwillingness to find a compromise.

"Frankly, there is no evidence that Democrats are making a sincere effort to get a bill passed in the Senate," Boehner said in his letter. "With Republicans and you in general agreement on the policy, it is difficult to identify any motivation other than politics to explain why a solution has not already been signed into law."

Democrats including Minority Leader Nancy Pelosi and California Representative George Miller, using college students as a backdrop on the same day, vowed instead to force a vote to extend the current lower rates.

"The only thing that could happen that's worse than that is if the Republican bill should pass, because that's worse than doing nothing," said Miller, who is also senior Democrat on the House Education and Workforce Committee.