New data released on Friday shows British consumers are increasingly optimistic about the health of the U.K. economy, but economists warn that the country still has a long way to go before it returns to pre-crisis growth levels.

Consumer confidence hit a two-year high in June, according to market research company GfK. The data follows revisions of official economic growth numbers on Thursday that showed that, although the U.K. actually avoided a double-dip recession in 2011, the country suffered a far worse recession in 2008 to 2009 than previously thought and is further away from pre-crisis growth levels than previously thought.

The reassessment of gross domestic product (GDP) data by the country's office of National Statistics revealed that, specifically, output dropped 7.2 percent from a pre-crisis peak in early 2008 to mid its 2009 trough, more than the 6.3 percent previously estimated.

It means the U.K.'s current economic output is 3.9 less than its peak, rather than just 2.6 percent as previously estimated. That could mean that a U.K. recovery is further away than initially thought. It also puts pressure on finance minister George Osborne to get the economy back on track.

The chief U.K. and European Economist at IHS Global Insight did not expect the U.K. economy to return to early 2008 levels, when the UK economy grew 2.5 percent year-on-year, until the third quarter of 2015. He said the latest data showing the U.K. had avoided a double-dip recession represented a "Pyrrhic victory" for the U.K.

The annual growth rate in the first quarter of 2013 was just 0.6 percent. 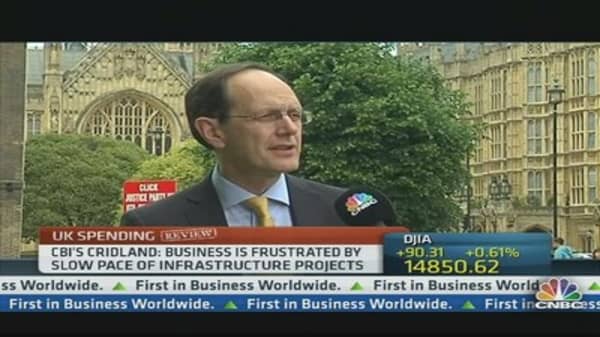 Archer added that Thursday's news that the economy was currently operating at a level further below the peak level seen in 2008 increased the chances that the Bank of England under Mark Carney, who takes up the position as the bank's governor on July 1, will go for more quantitative easing within the next few months if the recent signs of economic improvement are not sustained. (LINK Matt's piece)

He did believe however that the economy was slowly recovering.

"The recent improvement in a wide range of indicators suggests that the U.K. economy may finally be moving to a firmer footing – and it could be particularly significant that the improvement in the data and survey evidence for May occurred across a number of areas," Howard Archer told CNBC on Friday.

Archer's comments come after the U.K.'s finance minister, George Osborne said on Wednesday that the U.K.'s deficit was down by a third, that a record number of people were in work and that the economy had returned from the brink of bankruptcy during his annual "Spending Review" presented to the U.K. parliament.

Chris Scicluna from Daiwa Capital Markets disagreed, telling CNBC that the data told us that "simply we have a long way, a longer distance to cover if we are to return to growth." He said it was a "brave assumption" to assume U.K. GDP levels would return to pre-crisis levels by 2015.

(Read More: 'Not Much Room for Maneuver' for UK: Fitch)

"There have been no announcements from Osborne, whether this week or previous announcements, that suggest there is an appropriate policy to boost demand in the near term. We're on a path of reductions in public expenditure in real terms, rather than growth. And in fact households need to be saving money according to the latest data, not spending it," he told CNBC.

"To achieve sustainable growth a whole lot more of adjustments need to be done," Scicluna added.

"The GfK Consumer confidence indicator remains well below levels seen between 1998 and 2007 – the recent bounce is understandable given the reduction of Armageddon headlines emanating from the euro zone over the past few months. Despite the move higher confidence remains relatively fragile."

"Unemployment remains uncomfortably high, as does inflation and we remain heavily influenced by exogenous factors. If the European periphery experiences further stress going forward, or we see pockets of stress from other trading partners across the globe, the ONS forecasts may be too sanguine," he added.

Day said that although Osborne's spending Review had been "helpful" in terms of infrastructure spend, the continued policy of austerity has tied the coalition's hands with respect to any dramatic fiscal stimulus.

"The U.K. remains fiscally challenged and I expect that to remain the case through to the next election. The Chancellor's statement was the opening salvo on the way to the ballot box, though his destiny will still be heavily influenced by what transpires away from these shores."