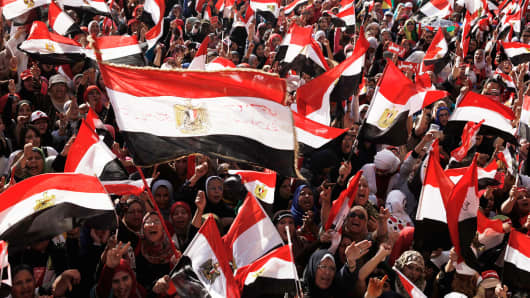 Getty Images
Egyptian opposition protesters chant during a demonstration in Tahrir Square as part of the 'Tamarod' campaign in Cairo, Egypt.

President Mohamed Mursi rebuffed an army ultimatum to force a resolution to Egypt's political crisis, saying on Tuesday that he had not been consulted and would pursue his own plans for national reconciliation.

The Islamist leader described as potentially confusing Monday's 48-hour deadline set by the head of the armed forces for him to agree on a common platform with liberal rivals who have drawn millions into the streets demanding Mursi's resignation.

Members of his Muslim Brotherhood have used the word "coup" to describe the military maneuver, which carries the threat of the generals imposing their own road map for the nation.

But in a statement issued at nearly 2 a.m., fully nine hours after General Abdel Fattah al-Sisi delighted Mursi's opponents by effectively ordering the president to heed the demands of demonstrators, the president's office used considerably less direct language to indicate he would try to take little notice. 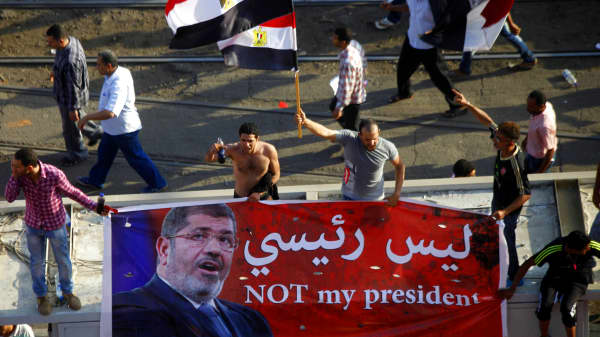 "The president of the republic was not consulted about the statement issued by the armed forces," it said. "The presidency sees that some of the statements in it carry meanings that could cause confusion in the complex national environment."

Official video was released showing Mursi meeting the uniformed Sisi. Their body language seemed awkward, although it was unclear when it was shot.

The statement from Mursi's office continued, "The presidency confirms that it is going forward on its previously plotted path to promote comprehensive national reconciliation ... regardless of any statements that deepen divisions between citizens."

Describing civilian rule as a great gain from the revolution of 2011, Egypt's first freely elected leader, in office for just a year, said he would not let the clock be turned back.

But in referring to his plans for reconciliation as those he had spelt out before, he was speaking of offers that have already been rejected by the opposition, leaving it improbable that such compromises would bear fruit before Sisi's deadline. 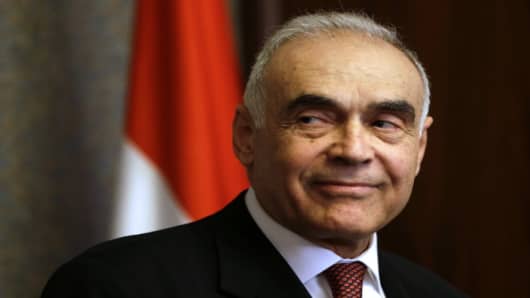 A sense of disintegration in the administration since the protests on Sunday has been heightened by the resignations tendered by several ministers who are not members of Mursi's Muslim Brotherhood. On Tuesday, the state news agency said the foreign minister, Mohamed Kamel Amr, had also asked to step down.

Attacks on Brotherhood offices have added to feelings among Islamists that they are under siege.

Some Brotherhood leaders, who swept a series of votes last year, said they would look to put their own supporters on the streets. After the destruction of the Brotherhood's headquarters in a battle overnight on Monday in which eight people were killed, the possibility of wider violence seems real. World powers are looking on anxiously, including the United States, which has long funded the Egyptian army as a key component in the security of Washington's ally Israel.

General Martin Dempsey, the chairman of the Joint Chiefs of Staff, spoke to his Egyptian counterpart, General Abdel Fattah al-Sisi on Monday, although it was unclear what was said.

President Barack Obama has urged Mursi and his rivals to compromise. But Washington has also defended the legitimacy of Mursi's election. It is unclear how far the Egyptian military has informed, or coordinated with, its U.S. sponsors.

The coalition that backed Sunday's protests said there was no question of it negotiating now with Mursi on the general's timetable and it was already formulating its positions for discussion directly with the army once the 48 hours are up.

Sisi, in his broadcast statement, insisted that he had the interests of democracy at heart - a still very flawed democracy that Egyptians have been able to practise as a result of the army pushing aside Hosni Mubarak in the face of a popular uprising.

That enhanced the already high standing of the army among Egyptians, and the sight of military helicopters streaming national flags over Cairo's Tahrir Square at sunset, after Sisi had laid down the law, sent huge crowds into a frenzy of cheers.

But on the other side of Egypt's polarised politics, a Brotherhood spokesman said it might considering forming "self-defence" committees after a series of attacks on its premises.

Another leading figure in the movement, Mohamed El-Beltagy, said: "The coming period will witness an alignment between all the Islamist forces. Their sons will be called on to demonstrate in all streets and squares of the country." 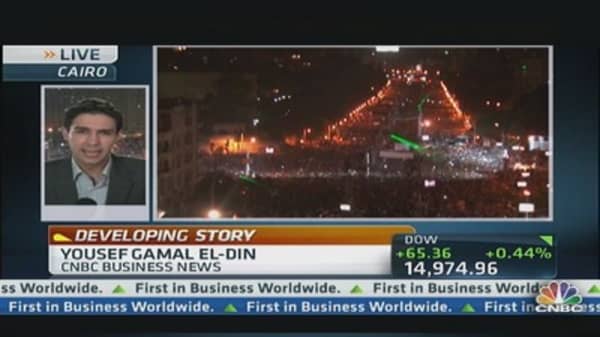 Among Mursi's allies are groups with more militant pasts, including al-Gamaa al-Islamiya, a sometime associate of al Qaeda, whose men fought Mubarak's security forces for years and who have warned they would not tolerate renewed military rule.

An alliance of Islamist groups, including the Brotherhood, issued a cautious joint statement that avoided criticizing the army but spoke of it being manipulated by rival parties.

Some Islamist groups, notably the Salafi Nour Party, which came second only to the Brotherhood in parliamentary elections last year, have spoken in favor of dialogue.

But scope for compromise between Mursi and his liberal critics appears narrow without the army imposing a deal.

Mursi has said he favors moving to elections for a new parliament that would give the opposition more say - if, as he points out, it has popular support. But the opposition, convinced the Brotherhood is out to entrench its rule forever, does not trust Mursi and wants to wipe clean a messy slate of institutional reforms since 2011 before holding a vote.

To that end, liberal coalition leaders, represented in negotiations by former U.N. diplomat Mohamed El Baradei, are pushing for the senior judge on the constitutional court to replace Mursi as head of state for an interim period, while technocrats - and generals - would administer the country.

How far Sisi is prepare to push Mursi is not clear. Despite a hard line being taken by opposition leaders, some compromise in which Mursi was given time to lead the country, or perhaps to call a referendum on finishing his term, might be possible.

A military source said Sisi was keen not to repeat the experience of the year and a half between Mubarak's fall and Mursi's election, when a committee of generals formed a government that proved unpopular as the economy struggled.

The army's preference would appear to be for a more hands-off approach, supervising government but not running it.

For many Egyptians, fixing the economy is key. Unrest since Mubarak fell has hobbled tourism and investment and the state finances are in poor shape, drained by extensive subsidy regimes and struggling to provide regular supplies of fuel.