This May Be a Make or Break Week for the Aussie

This could be "a make or break week" for the Australian dollar with three major factors - the Federal Open Market Committee (FOMC) minutes, Chinese and Australian economic data - set to determine whether the embattled currency will break below the key $0.90 level or reverse its downtrend.

"This is a week when the Australian dollar could break $0.90 or squeeze higher," Kathy Lien, managing director at BK Asset Management wrote in a note late Monday, referring to the three risk events.

"[However] if this week's event risks give speculators any reason to take profit or reconsider their short positions, the liquidation could drive the Australian dollar above $0.92 and most likely $0.93," Lien said, noting that short Australian dollar positions are still near records highs.

The Aussie, which has depreciated 12.5 percent against the U.S. dollar over the past three months, has been hit by a slew of concerns including falling commodity prices, a slowdown in Australia's top trading partner China and the prospect of the U.S. Federal Reserve scaling back its extraordinary monetary support. The currency is now at its lowest level against the greenback in two and a half years.

(Read More: Can Rudd Stop the Rout in the Aussie Dollar?)

On the economic data front, China's June trade numbers due out on Wednesday, will be critical for the currency, she said.

"If the data meet or beat expectations, the Australian dollar bounce could turn into a stronger recovery. However, if export growth slows or worse, declines which we feel is more likely the Australian dollar could be in big trouble with 90 cents potentially coming under threat," she said.

The Aussie pared some losses against the U.S. dollar on Monday, rising to $0.9145 as the latter paused in its rally. However, the commodity currency resumed its downtrend on Tuesday, falling 0.4 percent in the Asian trading session. 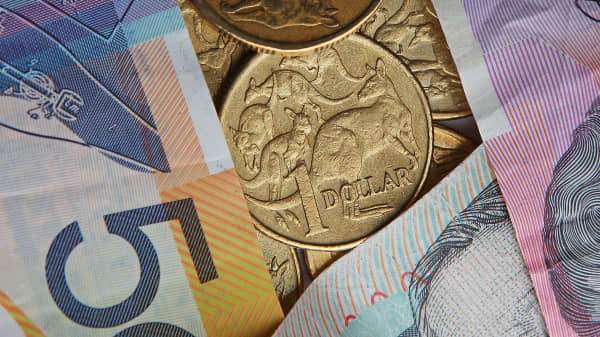 Chinese exports are forecast to have climbed 4 percent in June after May's rise of just 1 percent, according to a Reuters' poll. Imports, meantime, are expected to have risen 8 percent in June after a 0.3 percent contraction in the previous month. However, economists say a rebound in import growth will have been largely driven by a low base in the same month last year.

(Read More: The Risk That Markets Aren't Fully Bracing For)

In Australia, the country's employment report, set to be published on Thursday, will also play a role in determining the currency's next move.

"Economists are not looking for any major changes in job growth but the unemployment rate is expected to tick higher which could renew the sell-off in the currency," she said.

Finally, Wednesday's FOMC minutes, which may indicate whether the central bank has grown more willing to scale back its bond buying program, also presents another risk for the currency, she said.

(Read More: Fed Tapering? Here's Why It May Not Happen)

Strategists at National Australia Bank expect the Fed's comments to be an instrumental driver for the currency. The bank expects the currency will remain under pressure as the central bank moves forwards tapering.

According to Michael Judge, corporate forex dealer at OzForex, a global money transfer company, if the Aussie breaches the key support level of $0.90 in the coming days, the currency could test $0.885.