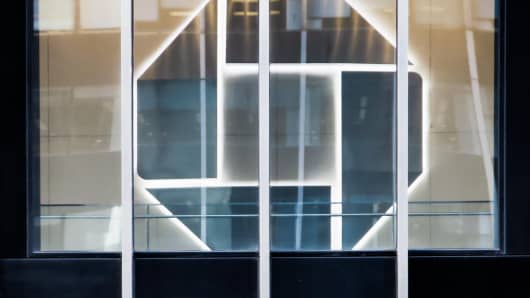 JPMorgan Chase shook off the lingering effects of a trading scandal, reporting on Friday that profit surged in the second quarter by 31 percent, based on rebounding trade revenue.

The year-earlier quarter included the vast majority of the losses of more than $6.2 billion on derivatives positions that were so large that hedge funds had referred to the trader handling them as the "London Whale."

(Read More: Why BanksHave a Friend in Bernanke) 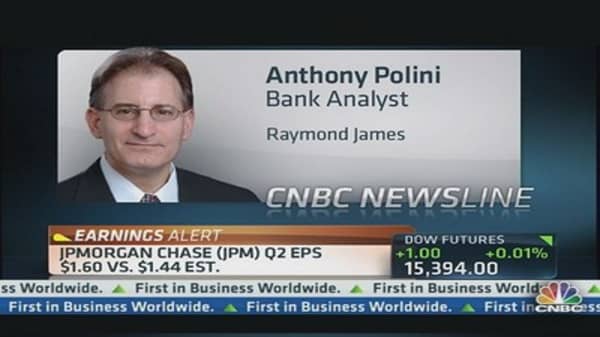 Analysts on average had expected earnings of $1.44 per share, according to Thomson Reuters I/B/E/S. It was not immediately clear if the figures were comparable.

The bank, whose shares were down marginally in premarket trading, said revenue from fixed income and equities rose 18 percent in the quarter compared with a year earlier.

The corporate and private equity division, which a year ago lost $1.78 billion after-tax because of the London Whale debacle, lost $522 million in the latest quarter.

JPMorgan shares, which were trading at $54.85 before the bell, had risen 25 percent this year up to Thursday's close, helped by growing confidence that the U.S. economy is on the road to a solid recovery.

However, the stock has been volatile in recent weeks because of concern that higher interest rates will erode the value of bank assets before they generate new revenue from lending.

The results are the first the bank has released since Chairman and Chief Executive Jamie Dimon overwhelmingly won a shareholder referendum in May on whether he should hold both posts.

"I don't think the Street likes the way they beat," Raymond James bank analyst Anthony Polini told CNBC. "We had some negatives in the quarter, primarily net-interest margin, net-interest income, [and] loan growth. About 15 percent of that headline number probably is fluff."

He added: "I think the next quarter will be key for the industry. The group has moved a lot."

JPMorgan Chief Financial Officer Marianne Lake said "there could be some acceleration" in previously announced cost-cutting targets, depending on market conditions.

In February, the largest U.S. bank by assets said it planned to cut 17,000 jobs by the end of 2014, or roughly 6.6 percent of its workforce. The job cuts were largely targeted at areas such as mortgage banking and retail banking.

Lake said JPMorgan remains on track for its targets, but "given what's going on in the market, there could be some acceleration." The mortgage business, which benefited from a wave of refinancing amid record-low interest rates, is expected to cool down as rates begin to rise.