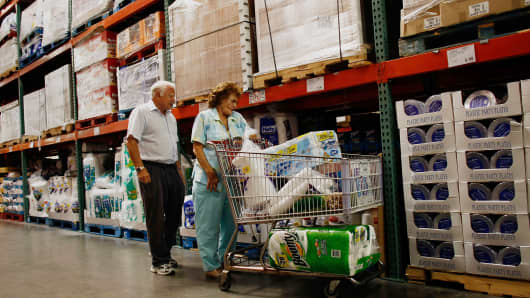 U.S. retailers' June sales suggest overall consumer spending is improving, even though lower-end shoppers are holding back on nonessential purchases.

Through Thursday morning, 10 stores had registered a 4.2 percent increase in June sales at stores open at least a year, topping analysts' expectation of a 3.6 percent rise, according to Thomson Reuters. The tally will be updated after Gap reports its sales after the market closes on Thursday afternoon.

The results, excluding the pending data from Gap, show that same-store sales have perked up since May, when they rose 3.4 percent, and are much stronger than a year earlier, when they fell 1.8 percent. 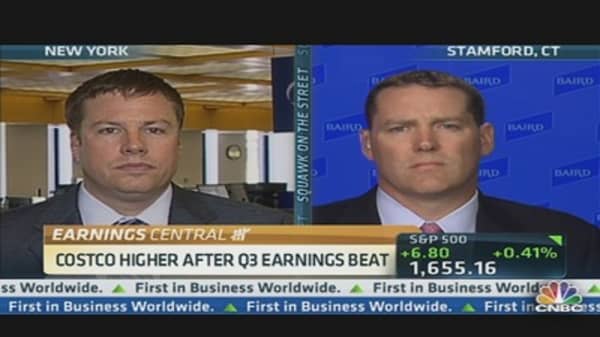 U.S. consumer sentiment improved in late June, ending the month close to a nearly six-year high set in May, with the optimism more marked among higher-income families.

Government data released on Thursday showed the number of Americans filing new claims for unemployment benefits rose last week, although the level still appeared to point to healing in the nation's job market.

Costco Wholesale, whose members pay annual fees of up to $110 to shop at its cavernous warehouse stores, said its same-store sales rose 6 percent last month. That surpassed analysts' expectations of a 5.4 percent increase, which were the highest for any company reporting.

"We get no sense from the company's results that it is feeling any macroeconomic pressure at all," said Cowen & Co. analyst Faye Landes, who has a "market perform" rating on Costco shares.

Sterne Agee analyst Charles Grom said the higher-than-expected sales came despite extreme heat on the West Coast, which has kept shoppers away in the past. Visits to Costco's warehouses remained strong, with traffic up nearly 5 percent.

Not all of the results were as strong as those from Costco, which is the largest retailer to still report monthly sales.

L Brands, the parent company of chains such as Victoria's Secret and Bath & Body Works, said same-store sales were flat, missing Wall Street's expectations of a 2 percent increase and the company's own forecast of a low-single digit percentage rise.

Still, L Brands said sales of regularly priced merchandise rose at Victoria's Secret, whose clearance discounts were not as aggressive as a year earlier. The company expects its overall July same-store sales to rise in a low-single digit range.

Cato still expects its quarterly profit to decline as same-store sales have been volatile so far this year, in part because of economic uncertainty and unseasonable weather, said Chief Executive Officer John Cato.

"We believe this uncertainty will continue, and we remain cautious as we look toward the second half of the year," he said.

Some chains that focus on discounts fared well.

Fred's, a general merchandise discount chain, posted a 4.5 percent jump in same-store sales, well above the analysts' 1.1 percent estimate. Warm weather helped sales of lawn and garden, summer toys and other seasonal items after such categories were weak during a cool and wet May.

Stein Mart's low-priced apparel continued to appeal to value-seeking shoppers, with same-store sales up 6.5 percent versus the analysts' forecast of 4 percent.

Shares of both companies rose more than 2 percent.

On Wednesday, Family Dollar Stores said it expected its customers to remain under financial pressure and hold back from purchases that are not absolutely necessary. The discount chain expects its same-store sales to rise 2 percent this quarter after increasing 2.9 percent in the three months ended June 1.

At its peak in 2006, the monthly same-store sales index included 68 companies led by Wal-Mart Stores, making it a much more significant gauge of consumer spending than the current group of 11.

Gap plans to report its June sales after the market closes on Thursday afternoon.