Most expensive car ever sold at auction fetches $29 million 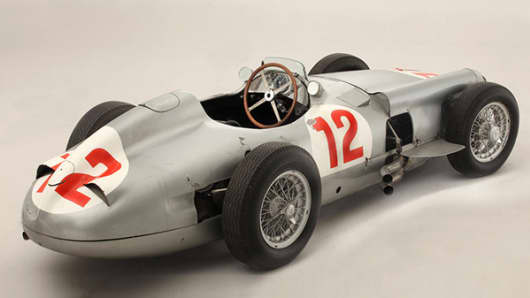 A 1954 Mercedes Benz Formula One racer just became the most expensive car ever sold at auction.

Bonham's, the auctioneer, confirms that it brought the hammer down on the Mercedes Benz W196R at $26.45 million—with the buyer's premium the total price is $29.6 million. That tops the previous record for the most expensive car sold at auction, a 1957 Ferrari 250 Testa Rossa Prototype, sold for $16.39 million at Gooding & Company's 2011 Pebble Beach Auction.

The sale, at the Goodwood Festival of Speed Auction in the U.K., shows that the collectible car boom is continuing to rage on —especially for rare cars with strong racing histories. The famous race car driver Juan Manuel Fangio drove the Mercedes W196 to victory in two Formula One races— the 1954 German and Swiss Grands Prix.

The single-seat racing car car also had a great history, with well-documented ownership over the past half-century and very few major changes or modifications to the car.

"It's highly original," said Jonathan Klinger of Hagerty, the collectible-car insurance firm. He said that for a buyer "you're really looking at a club of one. It's not like another one will come down the road for sale."

Klinger, who attended the auction, said there were bidders from four continents for the car. That shows just how global the collectible car market has become, with new millionaire and billionaire collectors coming out of Asia, Latin America and the Middle East.

(Read More: Buying a Picasso on Amazon? Not So Crazy Anymore) 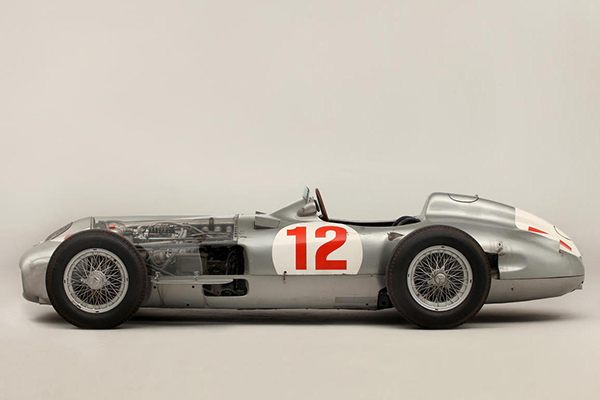 The Mercedes raced in five World Championship-qualifying Grand Prix races before it was retired from the Mercedes racing team at the end of 1955. The car was then prepped to full race standard and consigned to the Daimler-Benz Museum on Dec. 22, 1955.

In June 1965, it was exhibited in Munich, and during 1966 it was shown at both Le Mans in France and Hockenheim in Germany. It then appeared at the 1967 British Grand Prix at Silverstone, before being run in a test at the Untertürkheim factory test-track, and displayed in Berlin. In November 1967, it was exhibited at Stuttgart University.

On May 22, 1973, Mercedes-Benz officially presented it to the National Motor Museum in Beaulieu, Hampshire, England. But in the 1980s, the car was sold into private hands and preserved for years in a warehouse.