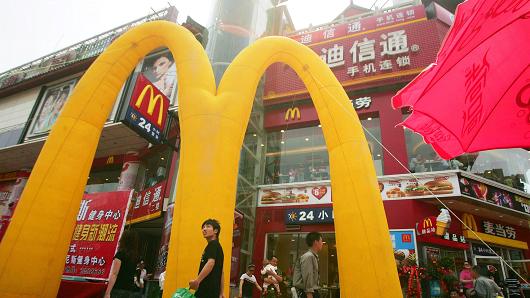 Light sales in Europe and Asia dragged on McDonald's earnings in the second quarter, the fast food giant reported on Monday, as the company fell short of Wall Street's expectations despite new menu items and higher U.S. sales.

The Oak Brook, Illinois-based burger behemoth posted earnings excluding items of $1.38 per share, up from $1.32 a share in the year-earlier period. Revenue increased to $7.08 billion from $6.92 billion a year ago.

Yet those results were not in line with analysts' estimates, which had expected the company to report earnings excluding items of $1.40 a share on $7.10 billion in revenue, according to a consensus estimate from Thomson Reuters.

Overall, both U.S. and total global sales rose by a percent. Still, gains were undermined by relatively flat performance in Europe and the Asia, Middle East and Africa regions.

"While our consolidated results this quarter were positive, global comparable sales for July are expected to be relatively flat," said CEO Don Thompson in a statement. "Based on recent sales trends, our results for the remainder of the year are expected to remain challenged."

Market watchers said McDonald's disappointing performance was reflective of the overall food industry, which is struggling to post growth while offering healthier menu fare. In recent months, the world's largest burger chain has been forced to fend off stiff challenges from competitors such as Wendy's and Burger King, which have tried to encroach on McDonald's turf by offering expanded menus and calorie-conscious food.

On a conference call with investors, Thompson cited softer demand in U.S. beverage sales, which coincided with weak results by beverage giant Coca-Cola. However, the CEO added that new menu items either met or outperformed expectations. While economic weakness is expected to be an issue for the remainder of the year, Thompson said the U.K. and Russia were helping to bolster an otherwise tepid outlook — weighed especially by weakness in Germany and France.

"The industry is still struggling. The market in total is probably growing at a very, very low single-digit rate, if at all," said Peter Saleh, director and senior research analyst at Telsey Advisory Group.

"For Europe, France and Germany have been week for McDonald's for probably a year now," he added.

After the earnings announcement, the company's shares dropped by more than two percent in pre-market trading. (Click here to get the latest quotes for McDonald's.)