Here’s what could make or break Abe’s reform plan

If Japan's Prime Minister Shinzo Abe, riding high on Sunday's election victory for his ruling coalition, is serious about transforming the economy, it's crucial that he pushes ahead with plans to raise a controversial consumption tax, analysts say.

The tax on goods and services, under the current law, is due to rise to 8 percent next April from 5 percent and to 10 percent in 2015, although there has been a heated debated within the government as to whether this should happen.

On the one hand a consumption tax is seen as a key measure to improving Japan's fiscal health. Japan, the world's third biggest economy, has a debt pile that is the highest among industrialized nations and its debt-to-GDP ratio is expected to top 245 percent this year.

But on the other hand, the tax could hurt consumer spending and stifle the economic recovery Abe is trying to engineer through a mix of fiscal spending and aggressive monetary stimulus.

"The decision on whether to raise the sales tax as early as next April is a finely balanced one with significant implications - both for the economy and for the perceived credibility of Abenomics," said Nicholas Spiro, managing director at Spiro Sovereign Strategy.

"The last consumption tax increase in Japan ended in disaster, helping trigger a recession. Yet if Mr Abe puts it off, doubts about the fiscal credibility of his project will grow, potentially spooking the bond market," he added

There is some concern that the strong win could make Abe less determined to push ahead with painful economic reforms. 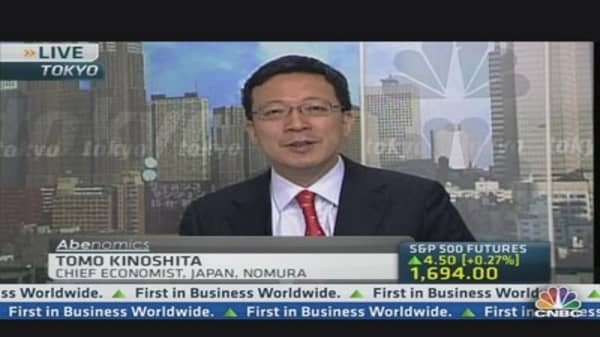 Abe said on Sunday that he wants to make a decision in the autumn on whether to proceed with the sales tax, while looking carefully at economic indicators, Reuters reported.

"There should be a sales tax because if they don't have one, there's no hope of stabilizing public finances and you do need to show some fiscal responsibility as well as having a growth plan," said Bank of Singapore's Chief Economist Richard Jerram.

(Read More: Is it 'all systems go' after Abe's big election win?)

Jesper Koll, head of Japanese equity research at JP Morgan Securities, added: "One of the key reasons why one is excited about Abe is that he brings consistency in policy making. Japan has an inefficient tax system and the efficiency of the tax system needs to be raised by raising indirect taxes, so going a steady course is going to be key to get investors excited."

For other analysts, the danger of raising the consumption tax is to kill-off consumer spending and undermine the stellar rally in Japanese stocks, which are up some 40 percent this year.

"It is very important in October when they [Japanese policymakers] discuss what to do with the consumption tax increase, that Abe delays it for several years," said Ron Napier, head of Napier Investment Advisors, speaking on CNBC ahead of the upper house elections.

"He (Abe) should rely on the economy generating enough tax revenues, he should rely on the tax payer identification number in 2016 taxing the underground economy. All these things could turn things around without hitting the consumer," he said.

— By CNBC.Com's Dhara Ranasinghe, Follow her on Twiiter: @DharaCNBC