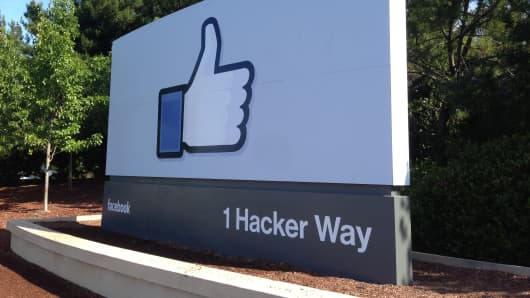 Recapping the day's news and newsmakers through the lens of CNBC.

Looks like our need to socialize is insatiable! Facebook shares soared 29 percent after the company's after-hours earnings report Wednesday showed the social networking company's mobile operations are finally on track. With profit soaring, the shares closed above $34 on Thursday.

The company said 41 percent of its second-quarter advertising revenue came from ads on phones and tablets, up from 30 percent in the first quarter. That blew away analysts' expectations for about one-third, and silenced critics who felt Facebook was failing to rise to the mobile platform challenge.

Facebook CEO Mark Zuckerberg said critics had also been wrong in claiming teenagers were drifting away from the service. With Instagram, the photo and video-sharing site included, teen time on Facebook sites is growing rapidly. The number of daily users rose 27 percent, to 6.99 million, while the figure for monthly active users was up 21 percent, to 1.15 billion.

Revenue grew 53 percent from a year earlier, and non-GAAP diluted earnings per share hit a higher-than-expected 19 cents, up from 12 cents in the year-ago period. Going forward, some analysts wonder if the growth can be sustained, noting that same-quarter comparisons will be more difficult in the second half of the year.

"To me it feels a bit like an inflection point. ... They were able to show to their advertisers that the ROI on Facebook is very strong. At the same time, they are able to maintain very high user levels and user engagement. That's a balance that they've been able to maintain. ... They've been able to answer the question on the transition to mobile. ... Those are the three key points and takeaways from the quarter that we are impressed with."—Sterne Agee analyst Arvind Bhatia

Notice to corporate executives: The buck stops with you.

That's the takeaway for leaders who otherwise might think the SAC Capital saga has nothing to do with them. A federal grand jury on Thursday charged the hedge fund with wire fraud and four counts of securities fraud. Last week, regulators filed a civil case accusing SAC founder Steven A. Cohen of failing to prevent insider trading at his firm.

Cohen, who has denied any wrongdoing, was not named in the new criminal case, but it could drive his firm under. Some reports say SAC clients are pulling their money out of the Stamford, Conn.-based firm, though hedge funds typically limit the pace of withdrawals to prevent a "run on the bank."

The allegations concern trading in stocks of various companies. One, for instance, involves trading on inside information about an Alzheimer's drug undergoing trials. Four SAC employees have been criminally charged with insider trading, and two of them have pleaded guilty. An SAC affiliate has agreed to pay $615 million to settle SEC charges.

"This indictment says, essentially, that SAC Capital underwent systemic insider trading. It was substantial, pervasive, without known precedent. That's the quote in the indictment."—CNBC's Bertha Coombs

Most of us can find something to do with ready cash. A vacation. A new car. Maybe even an investment or two. But big U.S. companies just keep socking it away for a rainy day.

Second-quarter results aren't all in yet but are likely to follow the pattern set in 18 of the past 20 quarters, as cash has continued to build at S&P 500 firms. Standard & Poor's says cash set a record in the first quarter of 2013, at $1.093 trillion. That's trillion with a T.

That could pay for a lot of new employees, research and development, stock buybacks or dividend increases. But corporate executives apparently prefer to keep their options open.

Among the reasons for the parade of record cash figures: earnings are at record levels, capital expenditures have not grown much and while buybacks have increased, they remain well below pre-crisis levels. Dividends have gone up slightly, but are down as a percentage of earnings.

"Why is this happening? They seem uncomfortable spending the money. Why? The commentary seems to indicate they don't have a lot of visibility or confidence in future growth."—CNBC's Bob Pisani

Will stocks tumble without the Fed prop?

Someday, perhaps this fall, the Federal Reserve will start winding down its quantitative easing program, which buys $85 billion in bonds every month to keep down long-term interest rates. Eventually, the Fed will allow short-term rates to rise as well.

What will shutting down the rate-reduction efforts do to stocks?

This question has been asked a lot in recent weeks, and will continue to be debated in the market. So add the latest: Some think the market has exaggerated the Fed's role in the equity run-up. Others, though, say low rates have been key to the stock market's success in the past few years.

The real unanswered question is: What will happen to profitability when interest expenses rise?

"People underestimate the extent to which quantitative easing has benefitted the S&P. ... Corporate America has seen a substantial decline in its cost of capital, and it has greatly benefited its bottom line."—Robbert van Batenburg

"The real pickle here is that there is no way of knowing what interest rates would have been without Fed intervention."—Russell Price, senior economist at Ameriprise Financial Services

—By Jeff Brown, Special to CNBC.com